This is the first job advertisement from a new factory


Tesla is planning a factory in Brandenburg. The first job advertisement is already online – for example in engineering and manufacturing.

Working at Tesla in production? With the first German factory and so far, which will start operating in Grünheide in Brandenburg from 2021, you can get such a job right away. On Tuesday night a big message came: Elon Musk had chosen the Brandenburg-Berlin location for his Gigafactory in Europe. At the same time as the announcement, the company's website already has four online job advertisements – applicants can apply for engineering, construction, operations and manufacturing jobs. "Apply now to be part of the first place for our gigafactory in the Berlin area," Tesla wrote happily. 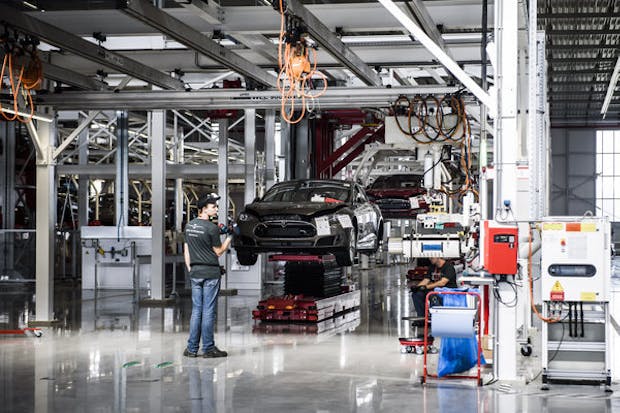 All positions are advertised full time. However, interested job seekers do not find out more. Tesla has previously held in-depth information – for example on job profiles or applicant requirements. Incidentally, Berlin Senator for Economy Ramona Pop expects thousands of new jobs. "There are currently around 6,000 to 7,000 jobs in factories in Brandenburg," he said, Wednesday. In addition, there will be "several hundred, if not several thousand" new jobs in Berlin, because Tesla is not only a pure car manufacturer, but also active in the fields of software, innovation and research. "Berlin is the right location, of course."

The extent to which Tesla positioned itself in this country as a coveted company, will be demonstrated. In the US, Tesla is often criticized for his working conditions. In September 2018, Business Insider spoke with 42 employees who reported 70 hours a week. "He started a project and we said, 'We need ten weeks,' he said, 'You get six,'" said a mechanical engineer. It is likely that an attentive security officer will guard the company passionately. In addition, the German working time law speaks relatively clear language and places itself in cases of violations that are usually committed by the plaintiff – when it comes to complaints.

Tesla's overall rating of 3.3 also does not apply well to Glassdoor's employer ranking platform globally. For example, Daimler can score 4.3 points. The average for the platform is 3.4, according to a Glassdoor spokesman. Especially with regard to the categories "work-life balance" and "management level", car manufacturing employees are very important. Both Tesla and Daimler employees seemed to agree that they did not give their company a very good business view. Also in the case of the "career opportunity" category, workers from both companies tend to agree – "good" tends.

By the way, this post might interest you: Gigafabrik Tesla moves directly to the German carmaker environment. That's difficult, Andreas Weck commented. Especially because War for Talents is now on the doorstep. Also read: "Now Tesla is also disrupting the German labor market"