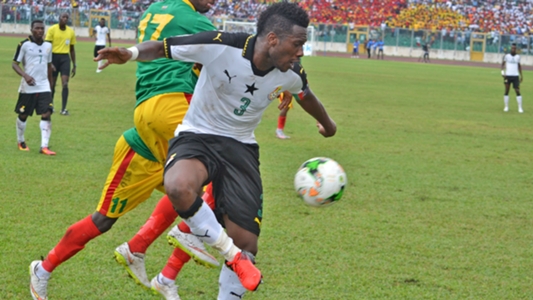 The skipper, who was optimistic ahead of Sunday's meeting, wanted his team to avoid the defensive blunders which resulted in their defeat to Kenya

Ghana captain Asamoah Gyan has urged his teammates to stay calm and focus & # 39; when they faced Ethiopia in the 2019 African Cup Group qualifier in Addis Ababa on Sunday.

The Black Stars beat Walias 5-0 in the first leg but needed another victory over them to smooth their way to the Afcon final in Cameroon next year.

Gyan, whose final match and goal for Ghana took place in the first leg, admitted the home fans would play a significant role in the second leg.

"Ethiopia is not on the same level as the Black Stars especially in terms of statistics. However, this is football and because they won their match against Sierra Leone, it underlines that there is no easy side in the group so we must be calm and stay focused," said Gyan.

"They don't have a cutting edge up front so they barely score a lot of goals but they are good with possession. Their fans will be around in their numbers to cheer them up for victory so the pressure will increase on us.

"We have to be firm behind and limit the mistakes we will make because it brings defeat against Kenya. We hope to win this match on Sunday despite everything," he added.

Ghana are third on three points, four points behind leaders Kenya and one point behind Ethiopia.