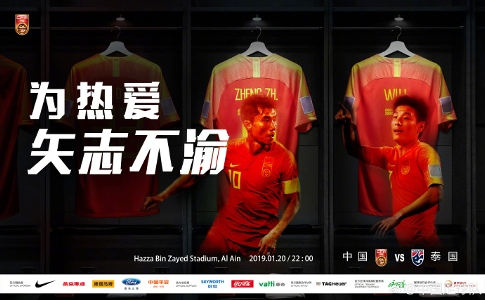 Thai poster released: I am determined to like it! I hope that the Chinese men's soccer team will be able to win the Asian Cup key battle.

At 10 o'clock in Beijing time, the Chinese men's soccer team will welcome their first match of the UAE 2019 Asian Cup knockout, and their opponent is a Thai team that previously destroyed national football 5-1.

As usual, the Chinese soccer team officially released pre-match posters before the competition, and the theme of this poster was: To be passionate about love!

The Chinese soccer team official wrote: "At 22 o'clock today, the Chinese team will usher in the knockout round of the 2019 Asian Cup. Our confidence in progress has never faltered, and we will do our best for love!"

In this poster, male soccer spirit leader, team captain Zheng Zhi and the tactical core of Wu Lei's team are two protagonists, which also indicates that they are expected to debut in tonight's game.