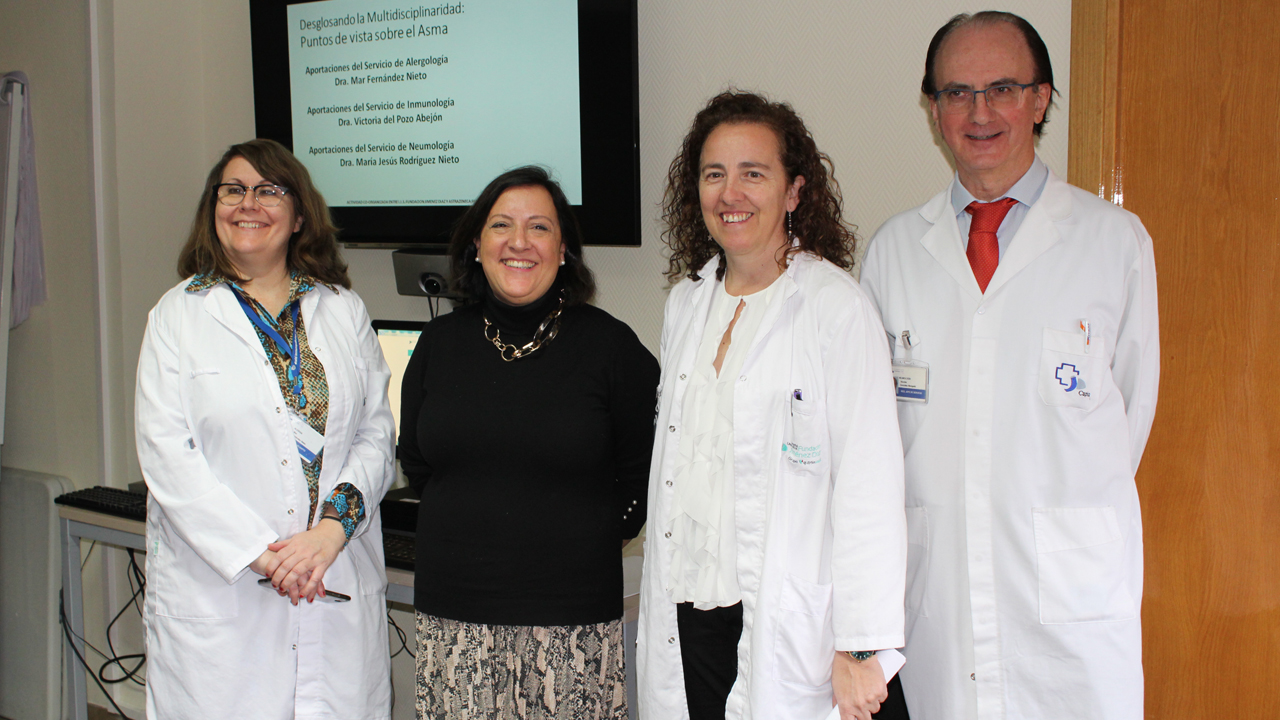 This time, there are more than 300 million people with asthma and it is estimated that by 2020 the number will reach 400 million. This is estimated data because there is still a high percentage of people living with the disease without realizing it and without a diagnosis, especially in adults. This was demonstrated in a workshop held at the Fundación Jiménez Díaz University Hospital, in Madrid, in collaboration with AstraZeneca. Underdiagnosis is caused by many factors but mainly because many health centers do not have the tools needed to screen and detect disease, as criticized by experts gathered in Madrid, which makes patients late consulting specialties and receiving late treatment, worsening the disease. And, at present, 3.9% of patients with asthma have severe uncontrolled asthma. According to María Jesús Rodríguez Nieto, associate head of Pneumology Service in the hospital, "severe asthma is a known disease but is considered low in terms of the perception of the low severity that may be experienced by the affected person." As reported Mar Fernández Nieto, deputy doctor of Allergy Services and a member of the Asma Multidisciplinary Unit from the Jiménez Díaz Foundation, "if asthma is not controlled in its initial phase, lung function is lost, which is equally important and dangerous by having high cholesterol".

Besides the lack of resources in many health centers, Another reason for underdiagnosis lies in occupational asthma. Although most cases of asthma are related to allergies (at 75%), there is a high percentage associated with the job of that person (between 15 and 20%). "It's about work-related asthma," Fernández Nieto recalled. A type of asthma that appears in adulthood and which is associated with certain types of work such as bakers or workers who handle many chemicals. "Many of these people have symptoms but don't associate them with asthma," said Fernández Nieto, therefore the importance of conducting timely tests at the right time, because, "When the patient arrives at the clinic, he has spent an average of between 4 and 5 years which increases the likelihood of asthma becoming serious, "he warned.

As experts say, currently the type of asthma is increasingly common, especially for professions that have increased in recent years. "It's very common to see asthma cases in professionals in the fields of fragrance, hairdressing and beauty," he said. "These people work with lots of chemicals with high irritant components." In addition, nail shops whose workers also handle chemicals and small bakeries with "inadequate ventilation" are now very fashionable.

To have asthma, you must have a genetic predisposition, besides being exposed to various environmental stimuli.

As for the symptoms, the frequency and severity of asthma will vary from one person to another and usually get worse with physical activity or at night. In fact, according to Rodríguez Nieto, "Many cases are detected because they are associated with exercise and intense physical activity. "

In the case of patients with severe asthma, Fernández Nieto shows that the most common signs are fatigue, persistent coughing and wheezing. Here the symptoms are "more frequent" and the main characteristic is "they cannot be controlled with the usual asthma medication".

"These symptoms interfere with their daily routine," said Rodríguez Nieto. According to one study, normal daily activities are affected more than once a week for 91% of patients with uncontrolled asthma versus zero percent of those with controlled disease. These people need to take medication chronically, it's important that they obey. "Another aspect that affects everyday life in an important way is the period of worsening disease, which sometimes requires hospital admission, "said the pulmonologist.. It is estimated that the number of hospitalizations per year is about 10 times higher among people with uncontrolled asthma than among patients with controlled asthma.

In order for patients with severe asthma to be evaluated more comprehensively by various experts, Jiménez Díaz Foundation has Multidisciplinary Asthma Unit, one in nine in Spain with a classification of excellence. According to Nicolás González Mangado, head of Pneumology Services, principal investigator, unit coordinator, said that, thanks to him, "we can learn more about the types of asthma and triggers, using more complex complementary techniques. This allows us to be more individualized and effective." that "offers a faster and more personalized set of decompensation evaluations and controls."