"I think I will die, I think about dying, I want to die, I don't see the future for myself."

He had arrived in the United States from his country in the Caribbean, pursuing a life he imagined as a child and, suddenly, he faced a problem he believed he was protected: HIV.

"I am a homosexual, I always know and always protect me (…) This is a big surprise," he explained from the other side of the phone, remembering the time he was diagnosed with a virus.

Daniel spoke with BBC World without hesitation, although he preferred to remain anonymous because of the stigma that still weighed on those living with HIV, in the XXI century.

His family did not know the situation and not many people around him in Florida, where he had lived for 13 years; That's why he asks us to continue hiddens some details that can identify you.

This middle-aged Latino, dedicated to the aviation sector, ensures that he is infected Miami, a tourist city in the southeast of the country, which is known throughout the world for its kilometers of beaches and cultural mixes.

Your case is broken with that interesting picture and highlight the hidden face of the city: a serious HIV problem.

Miami leads the country's new HIV diagnosis ranking, with an average of 42.9 cases per 100,000 people in 2017, which doubles or nearly triples other major cities in countries like New York or Los Angeles, according to data from the Center Disease Control and Prevention (CDC).

About 60% of the new cases that occur in Miami are citizens latinos, which is not surprising given the composition of their society: around 70% of the population comes from Hispanic or Latin, according to the latest published census.

"There is a perception that HIV is something that is under control." There is no risk, everyone on treatment, this is the United States "… Nothing is far from reality," said Dr. Stevenson, who transferred his research on vaccines to the Massachusetts virus to Miami to work from the most affected areas.

Experts disagree with one reason to explain this situation and point to accumulation of circumstances.

On the one hand, the flow of tourists.

"Many of them don't know the risks in terms of HIV, so people come on vacation, want to have fun, and are vulnerable, they don't protect themselves and they are exposed to infection," explained UM specialist.

"Then, in terms of population, we have a high incidence of homeless people, mental problems, substance abuse, and then there are extraordinary ethnic differences, so it's the message we give to educate the population or protect themselves, sometimes it doesn't work well in all languages, "he summarized.

Although there is currently a treatment for HIV, called antiretroviral treatment, which can turn the virus into not detected and preventing it from being transmitted, the problem in Florida is that up to 20% of people living with the virus don't know it, Stevenson stressed.

In 2016, the government launched a plan to stop infection and reduce the number of deaths related to AIDS, which echoed several recommendations from a leading team of doctors.

The government's strategy focuses on expanding testing, providing easy access to methods of treatment and prevention such as Pre-Exposite Prophylaxis (PrEP) – a drug that prevents HIV infection – and raising awareness, determining the Florida Health Department in a statement sent to BBC World.

Go around the neighborhood hipster from Wynwood, one of the most fashionable areas in the city, there are frightening signs.

"G alertonorrea ", This can be read in uppercase letters at several bus stops.

This campaign is very common in other parts of Miami, but it is more difficult to find signs that refer to HIV.

After one of the posters, he found "Get out of the closet", at the first sight of a clothing store hippie second hand, with a pharmacy in it.

Between the retro hangers and armchairs, several white doors appeared in the background, a box with free condoms and computers: HIV and other sexually transmitted diseases were offered there. 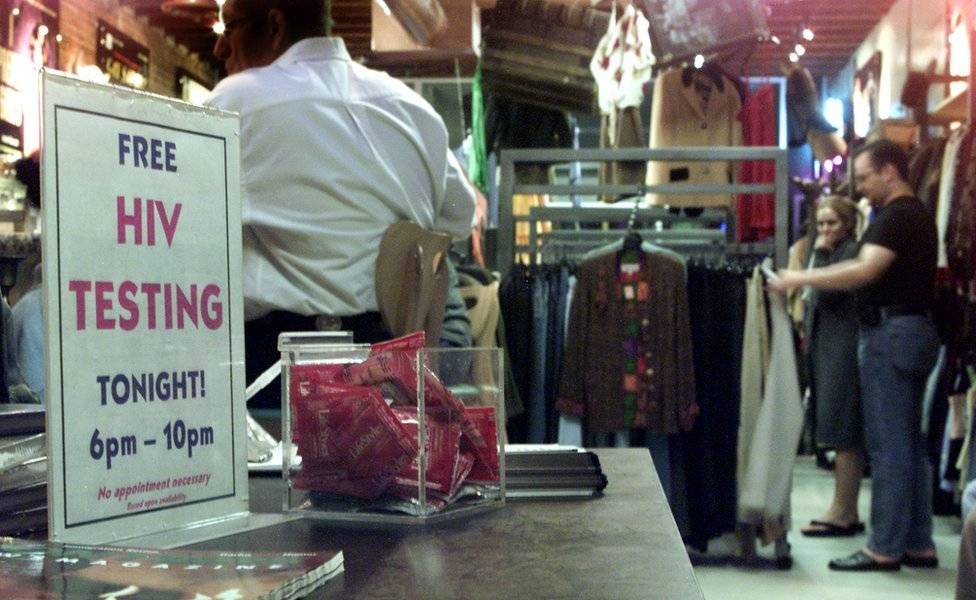 "There is one thing that repeats: stigma. That's why the concept is like this: You don't go to the clinic, you go to the store to buy things, and in the process you do the test, "explained Oscar Medina, a social worker who has spent three years in this nonprofit chain.

"It's free, all you have to do is register on the computer, in secret, after it's finished, we don't share information with anyone, only with the Department of Health, but the only case where the department will follow up under the bed is if you become positive and you don't go to your medical appointment. "

The key to HIV and AIDS

"I was tested (for HIV) every six months, which is very serious for me, for gay groups, That is very normal. "They talked about it as if they had the flu," he told BBC Mundo after leaving the test, which lasted about 15 minutes and, in his case, was negative.

Close relatives live with viruses and that is why Tatiana claims to be more vigilant.

From the consultation, decorated with a large and suggestive picture of Marilyn Monroe, Oscar Medina believes that young people are now far more open to talking about their sexual lives, which facilitates their work, but emphasizes that among Latino and Haitian communities, most affected by HIV in city, there are still big ones "taboo"

"Latins don't talk much about sex at home; Haitian people are far less. "

According to CDC data, the majority of HIV infections occur among men who have sex with men.

At another point in the city, in a simpler area, other teams offer similar services: but, if appropriate, the facility has four wheels.

This is a van who travel every day at some point of the city to do this type of test and exchange new syringe by other people used.

This type of prevention program has been implemented since the late 80s in other major cities in the country and the world, but in Miami it only started functioning two years ago. 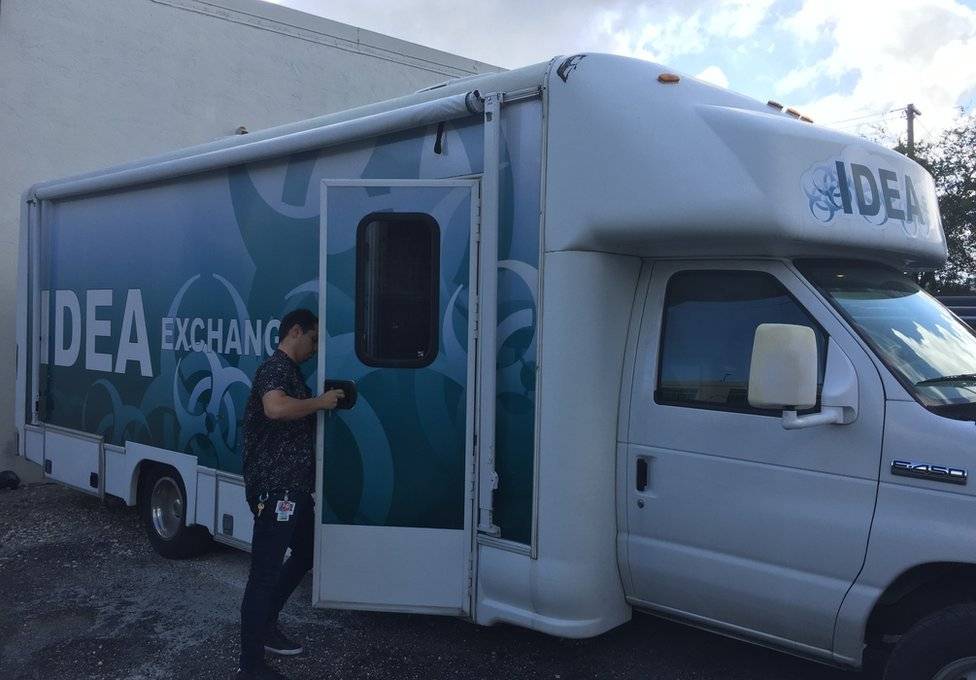 Previously, it was not legal.

"I come from Boston, Massachusetts, and they have this program there, and when I came here, because I was using drugs, I looked for something similar … and I found nothing, I think & # 39; what's happening? & # 39; It's crazy, "recalled Meghan Machud, originally from Brazil.

Leaning on his bicycle, Machud spoke with BBC Mundo after leaving doctor Hansel Tookes's office, the first promoter syringe exchange initiative in Florida ("IDEA Exchange"), which has treated you since you were infected with a virus in Miami by a "dirty" syringe.

"People always ask why Miami has the highest HIV ratio in this country, and that's because We do not use proven prevention methods HIV ", said the specialist, from the University of Miami (UM).

"That is not acceptable." 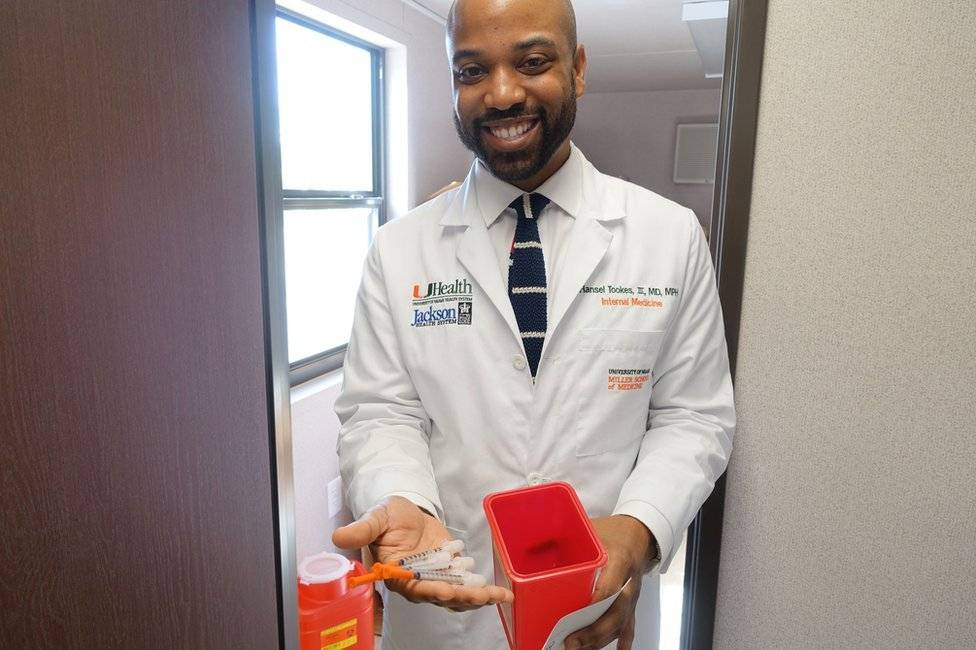 In the list of patients, there are many homeless people, but also people who live in the most exclusive neighborhoods in the city, married and have children.

This program is part of the UM health system and works in coordination with the Department of Health (Florida) so that people who need it can access treatment.

Now the step is relatively easy: on the same day you are diagnosed, you can see a specialist and leave consultation with the drug for 30 days, Tookes said.

But that's something they just started doing.

Other prevention methods that have become priority for the authorities it is the use of PrPP, a daily drug that protects against viruses and which was approved by the Food and Drug Administration in 2012.

Marco Torrealba of the 305 Prevention organization, is dedicated to promoting it among the Latin community and doing it for "middle ground": through dating applications like Grinder.

"PrEP began to be seen from the Latino community as" something I don't know, something for prostitutes, for whom want to have sex all the time& # 39; and that is not true. It has a completely different angle: that you want to take care of your health ", he defended in a conversation with BBC Mundo. 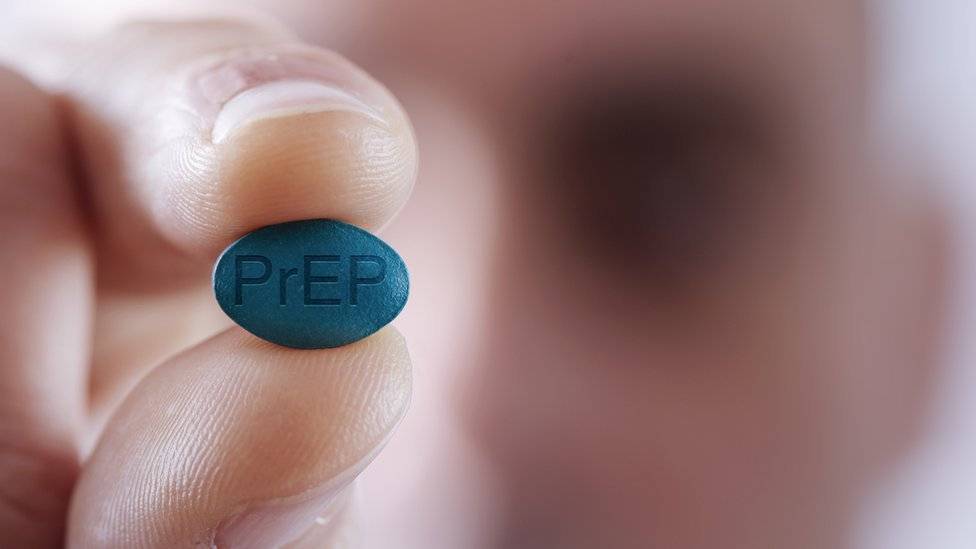 Critics say that PrEP stopped using condoms and, therefore, other sexually transmitted diseases increased – because, in their opinion, PrEP would end the fear of contracting HIV if they had unprotected sex.

Torrealba made him doubt.

"In my case, I use PrEP and use a condom." The fact that I am in PrEP does not mean that I am reckless in terms of obtaining HIV. What should I do? I continued to protect myself with condoms, because I knew what my PrEP level was, because sexually transmitted diseases were painful. "

Among the government's plans for this year, is offering PrEP without fees in Florida.

"Here the Ministry of Health has a problem: No one knows this. Question to anyone, and nobody knows. There is no advertising campaign that says so, "said Alejandro Acosta, a Puerto Rican who is dedicated to educating about HIV and related to the Florida Equality organization..

Acosta, who lives with HIV and tries to "set an example" for others, is very critical of the authorities and believes that they fail. 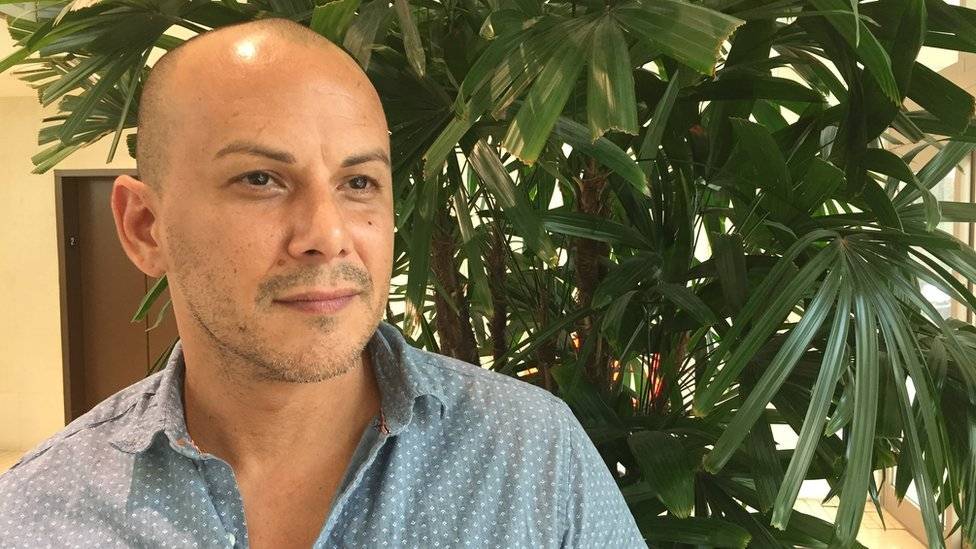 "The CDC announces that people with HIV in medicine don't infect anyone, but ask anyone on the road. Hey, look, did you know that someone who is in care does not spread HIV?" And no, he doesn't know. "

Contacted by BBC Mundo, from the Florida Department of Health, they only sent statements about their plans to fight HIV / numberssgo, where they highlight their commitment to eliminate new infections and ensure the care of those living with HIV or AIDS; but they refused to give interviews to this media.

According to figures sent by the Department of Health to BBC World, the number of diagnosed cases of HIV fell 5.4% in Miami-Dade County in 2017, but people who are at the forefront of "fighting" assume that there is still a long way to go.

One of the biggest obstacles is finding the best message for people as diverse as those in Miami.

It was one of the main concerns in all conversations and was also repeated at the HIV clinic at the city's public reference hospital, Jackson Memorial.

"We have a very diverse minority group, so that's a challenge"Recognizing Michael Kolber, director of this center, who tried to offer all types of care to patients who came: from psychological to education or information about health insurance. 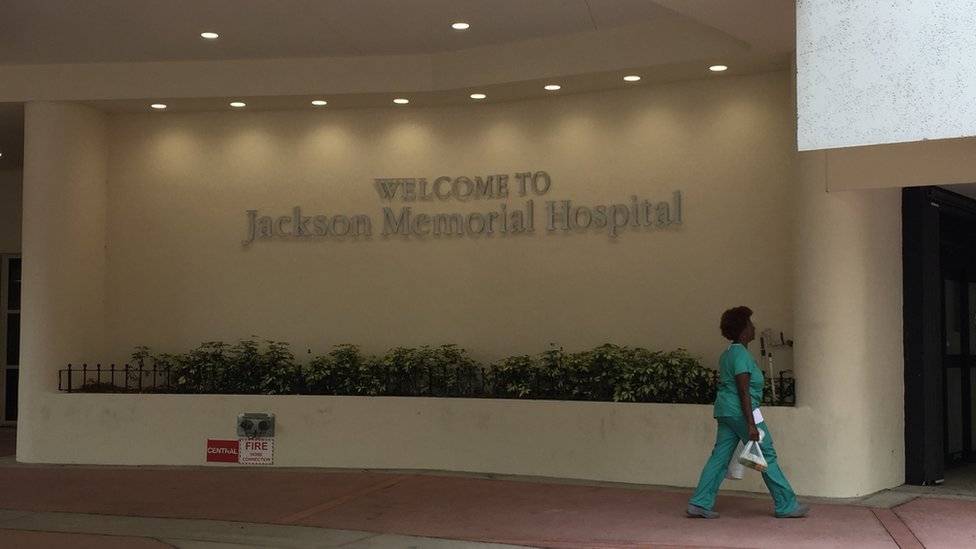 Years of budget cuts or lack of expansion in Florida Medicaid, health insurance programs for people with fewer resources promoted by former President Barack Obama, made the road difficult.

"The reality is that there are many things we can do, but Where do you get resources? That is the question. Because nothing has never been a panacea, "said the doctor.

However, Kolber is optimistic about the efforts that have begun to make the past two years, such as, for example, needle exchange.

"I think the fact that it started is a very positive thing, there is no point for me to think how slow they are, what is useful is to think about what has been done, and what it is great success" 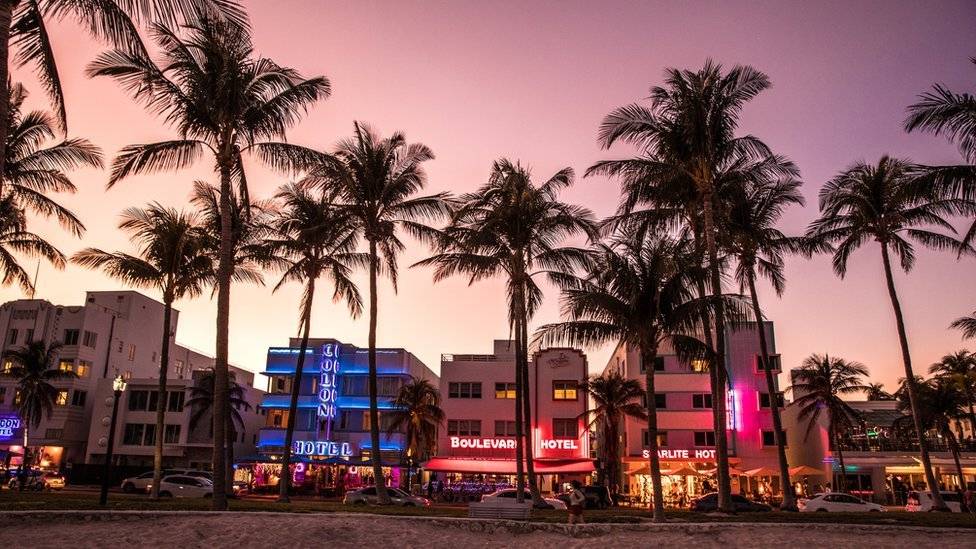 The most urgent task now, according to him, is "understanding and learning how to reach populations that don't listen."

"If we get to them, we can test them and treat them."

For Daniel, a Caribbean man who came to the United States in search of his dream, the message must be clear and concise: "This can happen to you".