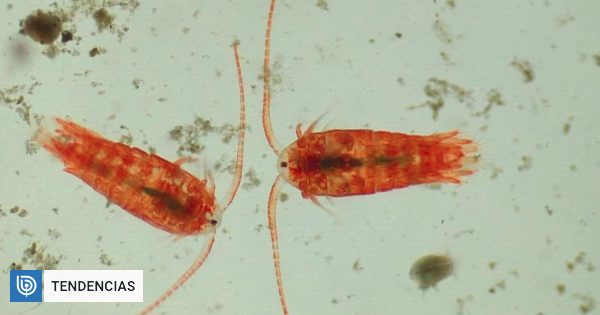 The small dimensions are not a barrier to their distribution throughout the planet. They are part of zooplankton in the marine and freshwater environments, in addition to fulfilling the fundamental role in the food chain and showing environmental changes. We refer to copepods, a group of crustaceans that live in almost all aquatic ecosystems and which have monopolized the attention of Chilean researchers.

For this reason, the Ministry of Environment issued a note about 14 species of copepods from the genus Boeckella that live in Chile and Argentina Patagonia, on sub-Antarctic and Antarctic islands. This work was prepared by scientists from the Institute of Ecology and Biodiversity (IEB), University of Chile, University of Magallanes, Costa Humboldt and British Antarctic Survey (UK), to facilitate research and democratize access to data in freshwater biodiversity that was little explored.

"Antarctic terrestrial or freshwater fauna is very rare and reduced compared to marine biodiversity, because there are no mammals, amphibians or reptiles and only one species of bird. In addition, many believe that the entire continent is frozen, but has the greatest diversity of liquid water systems , such as fords, lakes, among others, where copepods live, "said Claudia Maturana, a scientist at the Institute of Ecology and Biodiversity, who received support from CONICYT and the Chilean Antarctic Institute for its investigation.

While Lake Magellan and Antarctica they are usually oligotropic, That is, they have little nutrition, they are also different from each other.

While in Patagonia there is a greater species of Boeckella, only Boeckella poppei found on the white continent. This last species has aroused the interest of scientists to be the only invertebrates on the Antarctic continent, the Antarctic Peninsula and sub-Antarctic islands.

"While there are other freshwater copepods on the white continent, Boeckella poppei is the only crustacean that has a large presence in this region "explained Maturana, who exhibited part of this work a few days ago at the Natural History Museum in London.

Among the main characteristics of these animals are high endurance and adaptability. To get an idea, these arthropods have an intense red color that protects them from UV radiation, and inhabits large and deep lakes that are connected with marine waters, or in smaller, shallow ecosystems that feed on melting ice, sending at temperatures below 5 ° C , and even below 0 ° C.

"These animals can remain in an egg state for years, as if hibernating, to survive in extreme conditions. In winter, for example, lakes on frozen Antarctica, then for your life you can go to depth or lower your metabolic rate "

IEB researchers added: "In 2012, a team of Chinese scientists analyzed sediments from lagoons near the Antarctic base and detected viable Boeckella poppei eggs, which were 100 years old and could hatch at any time."

Dragged by the whaling industry?

At present, one of the big questions is how Boeckella Poppei is one of the representatives of the Antarctic terrestrial and freshwater fauna.

"There is no certainty about what happened when the continent passed the last major glaciation more than 20,000 years ago. While some showed that everything was extinguished, others thought that some species survived with the help of shelters," Maturana said.

Considering the wide distribution in Antarctica, Boeckella poppei is a model for testing two previous hypotheses.

The big question is what is this copepod colonizes the southernmost continent of Earth from Patagonia or sub-Antarctic islands, or if they survive by taking refuge in remote places during the glacial period and climate change that has occurred for thousands of years.

Although there is a connection between the Boeckella poppei population of Antarctica and Patagonia, this will not be very new because it will exceed 20,000 years. However, it has not been clarified how these organisms move. Some possible explanations suggest that seabirds traveling between the two continents could be vectors when moving these crustaceans.

Another possible mechanism will come to the heyday of the whale hunting industry in the nineteenth century. The crew of the ship extracted fresh water from the Antarctic lagoon, which was stored in barrels for consumption and other uses. Therefore, when transporting or emptying containers with liquid, cetaceans can move the copepods to places they have never visited before.

However, none of these theories has been proven.

"The population of Antarctic copepods remains very pure and little intervention. We have not detected a greater level of human impact, "said the scientist.

Despite having clear "super-crustacean" attributes, there is no clear idea about the mechanism of differentiation and adaptation to the different ecosystems in which they live. An example of this is that some individuals have experienced a reduction in their body size and female fecundity, in response to reduced availability of resources on the Antarctic continent.

"Although the role of these animals has been studied as a sentinel of climate change or as an indicator of water quality, research on evolutionary patterns of freshwater fauna has been little explored. That is why it is important to produce and provide information from Chile to learn more about freshwater biodiversity in high latitude ", Maturana.