Chapel, bridges and hospitals: up to 97 years have been waiting for public works projects in this country National 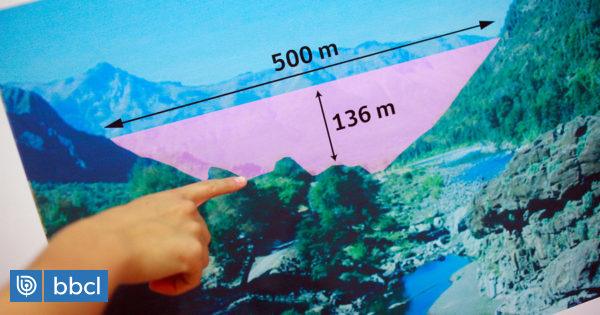 The oldest unfinished work in Chile dates from 1922 and was designed by the architect of the Sagrada Familia Basilica, in Barcelona: Antonio Gaudí. Many rancagüinos will die waiting for the construction of a replica of the Asunción Chapel, in the regional capital O & Hig ins Higgins.

In addition to the chapel, there are also roads and infrastructure that sleep on paper throughout the country. This happened for various reasons: bankruptcy or development violations, financing problems and even archaeological findings, according to El Mercurio's slogan.

There are also delays in thereuble, but half a century, like the Punilla Reservoir, which will be located on the Touble River to build a hydroelectric plant, which costs US $ 564 million (around US $ 380 billion).

This project has an Environmental Qualification since 2010 and, according to the Ministry of Public Works (MOP), not until 2019 will be able to start work, with ongoing engineering.

Both symbol projects (and perhaps forget) face the problem of high costs that exceed local reality.

Regarding the International Antarctic Center (the design completed in 2017), the mayor of Magallanes, María Teresa Castañón, shows his priorities. "I can't spend everything on one project if I have people fighting for housing today", he said.

The Puntarenas scientific work costs 84 million dollars. That is, more than 56 billion pesos.

Another obstacle faces the construction of 400 meters of Route 5, between La Serena and Vallenar. Work awaits a report from the National Monument Council (CMN) to find archeology at El Olivar, in 2014.

After shuffling unresolved options, CMN accepts road proposals from MOP and Serene work to be continued in April 2019.

More to the center of the country, the concession and extension of the bustling El Salvador Hospital, in Santiago, also expects the CMN report for archaeological conflict in 2016. Finally the agency released land this year and work, for $ 181 billion, will be executed immediately

On the other hand, there are projects that have not seen the light because of the problems of construction companies. This is the case with the second phase of the GAM Cultural Center, which began in 2015 and is only 48% complete. MOP will call a new tender.

Since 2014 he has slept in La Araucanía, a road that connects Tranapuente to the border, on Route S-138.

In Osorno, the PDI building has been waiting since 2017 and costs $ 14.5 million. After meeting a list of pending projects, Harry Jurgensen, mayor of Los Lagos, said they "worked to unlock them."

On the one hand, 11 years ago, those in Huasco were waiting, in the Atacama region. And in Maule, Cauquenes hospital has been waiting since 2010, but at a cost almost three times that of the northern part of the country.

In Antofagasta, Circunvalación has a design phase between 2012 and 2017 and no progress has ever been heard. This work costs $ 158 billion.

In Valparaíso, 1.2 million dollars were lost for the recovery work Av. España, which was tendered in 2015.

Further south, in Bío Bío, the extension of Route 160 has been paralyzed since 2010, linking Concepción with La Lota and Arauco province, which costs more than $ 6 billion.

On Los Ríos, the bridge between Cochrane and Los Pelúes has been paralyzed since 2017 due to problems with takeovers.

And in the Patagonian zone, the tangible sewer system of Caleta Tortel has waited 11 years for work, which exceeds $ 8 billion, to benefit the community.

Many of these projects are concessions with private companies and, although they have different interests, state resources are allocated to work in accordance with the contributions of all citizens.