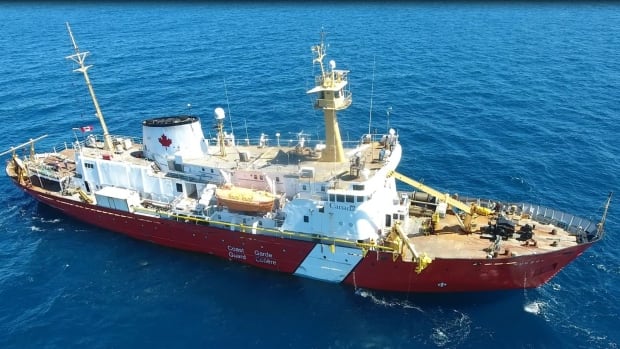 Ninety years after the deadliest earthquake in Canada's history struck the North Atlantic, researchers have found evidence that the region is more vulnerable than they had previously thought.

The lower part of the Scotian slope, southwest of Nova Scotia, experienced a large landslide at a speed 10 times higher than previously thought, according to a recent study published in Geology.

This might represent "a danger that is significantly underestimated along the western North Atlantic," the authors wrote.

Researchers found the remains of four underwater landslides in the past 4,000 years on the scale of the 1929 Grand Bank earthquake that caused the deaths of 28 people along the Burin Peninsula in Newfoundland.

"Not only do they potentially cause tsunamis, they also damage infrastructure on the seabed, such as submarine cables," Calvin Campbell, a marine geologist with the Canadian Geological Survey, said. CBC Mainstreet just.

While smaller landslides have been recorded near the Scotian Slope, until now it is believed that the 1929 earthquake was the only event of this size in recent history.

Campbell was among the research team who stumbled on this realization while conducting research off the coast of Newfoundland and Nova Scotia in 2012.

Coincidentally, the team discovered a landslide deposit three times the size of Prince Edward Island. It looked very much like the seabed after the 1929 earthquake – only bigger.

The researchers wanted to take a closer look, so they used a device called a piston core to collect sediments about 5,000 meters below the surface of the water.

The sample they took shows a landslide that occurred around 1,500 years ago.

90th anniversary of the tsunami

Landslides on the seabed can create a large ripple effect on water. That's what happened on November 18, 1929 when an earthquake hit the Continental Slope about 250 kilometers south of Newfoundland.

Monday marks the 90th anniversary of the tsunami that killed 28 people and injured hundreds more.

Campbell said that the Continental Slope was steep – "try walking from the top of Citadel Hill to the water's edge and that gives you an idea of ​​the slope" – and it's covered in mud.

So when an earthquake occurs, all the mud collapses, pushing water out if the way.

Two and a half hours later, people saw an empty port near the community along the Burin Peninsula.

"Such effects are common effects associated with tsunamis," Campbell said. "The water is taken and then this wall of water enters."

Campbell said the 1929 Grand Banks earthquake proved that this event did not just happen on the West Coast.

"The 1929 incident was the most documented victim of an earthquake in Canada," he said.

Along with dating the landslide, the researchers also took samples to see how stable the seabed is currently.

"It's nice to say that based on the samples we have, the seabed is what we call statically stable," Campbell said. "It seems that currently it is not in a collapsed state, and you will need an external trigger such as a large earthquake to cause one of these events.

But that doesn't mean Nova Scotia is coming out of the forest, he added.

It is nice to say that based on the samples we have, the seabed is what we call statically stable.– Calvin Campbell, Canadian Geological Survey

There are "several smoking guns" that could lead to a tsunami heading towards Nova Scotia, Campbell said. But they are more likely to originate from the Puerto Rico trench or northern Caribbean where there is a significant earthquake.

This study concludes that it is difficult to know whether underwater landslides found in the North Atlantic will trigger a tsunami.

"But the potential threat to coastal communities in eastern North America must not be ignored," the report said.