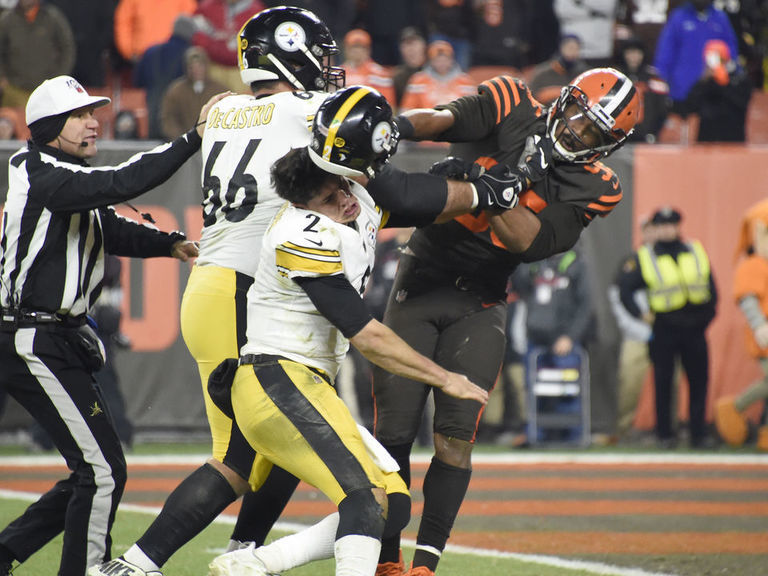 Myles Garrett swung the Mason Rudolph helmet to the quarterback in the final seconds of Thursday Night Football when a fight broke out between the Cleveland Browns and the Pittsburgh Steelers.

The Steelers immediately came to Rudolph's defense, resulting in Maurkice Pouncey kicking Garrett's head. Garrett and Pouncey were expelled, along with Browns overcoming Larry Ogunjobi, who also had an important role in the fight.

"I made a mistake," Garrett said after the match. "I lost my sincerity."

Pro Bowler 2018 added that he did not believe the incident overshadowed his team's 21-7 victory, even though Brown Baker midfielder Baker Mayfield suggested otherwise.

The second year parents looked disgusted by Garrett's actions when asked about them on the field immediately after the match.

"That is unforgivable," he said. "Competition or not, we can't do that. It's a kind of history of what's happening here lately, hurting yourself. It endangers other teams. It's unforgivable, he knows that – I hope he does it now."

When asked about the length of the possibility of suspension, Brown's head coach Freddie Kitchens told reporters that he was not sure what to expect.

"I'm ashamed," said Kitchen. "Myles is embarrassed. That's not good. … I've never seen him in my life, so we'll wait and see."

"The reality is, he will be suspended, we don't know how long, and that hurts our team," Mayfield added on the pitch. "We cannot do that, we cannot continue to hurt this team. That is unforgivable."

Players from both teams said the incident was not the result of increased tension from several hits from helmets to helmets that occurred earlier in the match.

Steelers head coach Mike Tomlin is more diplomatic, saying about the riots, "I will keep my mind to myself."