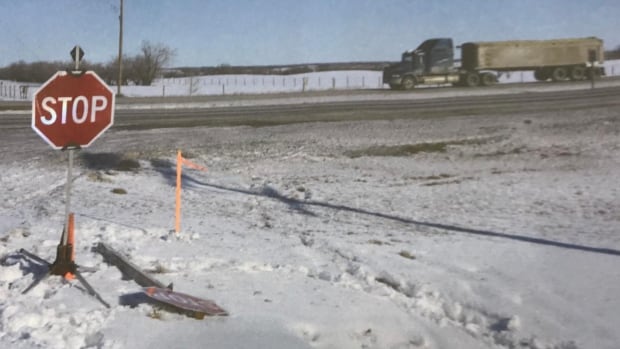 Robert Major should give up on highway traffic even if the stop sign is not on the day his truck collides with a full car carrier, an RCMP collision expert testifies at a dangerous Major driving trial on Friday.

In the darkness of the morning of February 22, 2016, Major drove his pickup truck north on Gravel Road 3058, towards Highway 16, about eight kilometers west of Langham, Sask.

After driving through the intersection of Highway 16 with a recorded speed of 134 kilometers per hour – more than 50 kilometers above the speed limit – the Major hit a semi car carrying nine and weighing around 36,000 kilograms. Major also called.

Collisions pushed spring more than 80 meters into the ditch. The front of the worn Major truck was put into the first semi trailer.

Oliverio and two children died in the massacre. 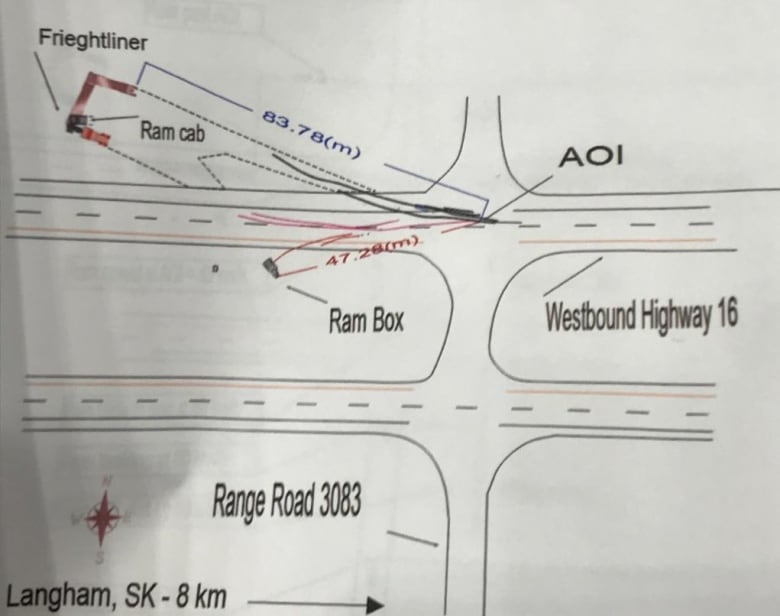 Major pickups hit the spring at high speed so that the spring was pushed more than 80 meters away, into the ditch, as shown by this diagram from the expert RCMP collision. (Court Exhibition)

On Friday, a collision RCMP collision collision. Douglas Green, an expert witness for Crown, testified that only vehicles traveling at "great speed" could explain the heavy car transporters driven so far by much smaller vehicles.

The jury heard earlier this week that the stop sign at the intersection had been overthrown two weeks before the accident.

The stop sign is clearly visible in the trial. Defense lawyer Mark Brayford asked Green to hold the stop sign as part of his testimony, to show off the reflective sheen of the sign.

Brayford and his counselor, Brian Pfefferle, have suggested that if the stop sign is already on the day of the accident, it will make Major stop in front of the highway.

Otherwise, the stretch of road leading to the highway is "a black hole," Brayford said.

Crown lawyer Michael Pilon pushed back to the idea, however.

"If the sign stops going down," Pilon asked Green on Friday, "does that make a difference so far [Major’s] failed to stop? "

"Not really," said the collision expert, adding that the law still requires people to generate other traffic at the highway intersection. "The stop sign is there to tell you to stop."

A replacement sign was installed at one intersection two days after the accident, Green added.

The Ministry of Highway and Infrastructure is responsible for these signs, said a witness earlier.

On Thursday, Pilon showed the video jury one year after the accident by Const. Gary Pepin, the first RCMP member at the accident site.

"There is a point where you see three different reflectors other than a stop sign," Pepin said about the view of the intersection offered by the video.

A year later, an RCMP officer rode the same road as the Major, to find out what the Major might have seen (minus the reinstated stop sign) when he approached Highway 16. The following video was taken by the officer. pic.twitter.com/K9ETbTxPVW

"It's important to pay attention while driving," the police officer added.

Green, a collision expert, testified on Friday that from a favorable place starting just before the intersection, the Major should have a clear view of the road and the approaching car carrier that collided with him.

A man who changes

Eckel, adult passengers who have survived the wreck, are in the next position at the witness stand.

He said it was foggy on the day of the accident, which clashed with previous witnesses' testimony that it was relatively clear.

Eckel worked for the Major as a laborer and lived in a Major's house, just outside Langham, the night before the accident.

But Eckel doesn't remember anything about the collision itself. The collision made him damaged his brain and back were broken, he said.

His sister-in-law, Nedine Woods, testified later. He said the accident – which caused the truck to be badly damaged so it needed a rescuer three hours to pry Eckel and other passengers out – made Eckel change, the previous strength was lost. 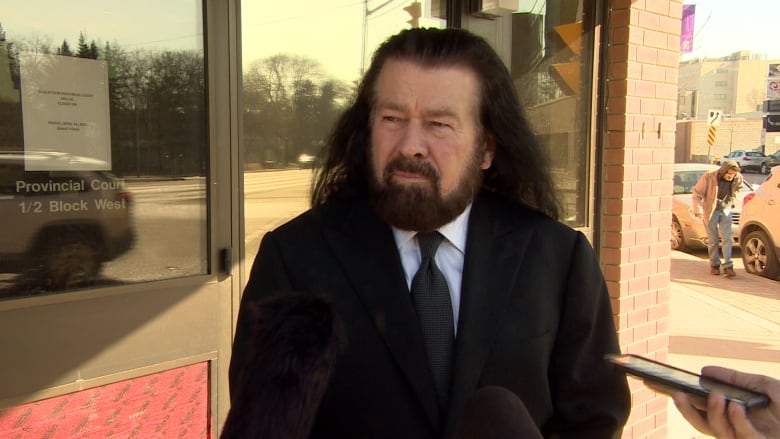 Defense lawyer Mark Brayford said that if the stop sign had gone up, it would be a clue for the Major to stop. (Charles Hamilon / CBC)

"He suffered from back pain all the time," he said. "Every time he bends, it's hard for him to wake up. He brings home some food ingredients and he's out of breath."

The last two witnesses on Friday were firefighters who helped dig Major, Eckel and five others from the wreckage of a truck.

"He is on a pile of people and debris," Brian Hyland, a captain with Dalmeny, Sask, a volunteer firefighter, said about the Major.

Two children who survived the crash were expected to testify Monday.

Defense will then make an opening argument.

The major itself is likely to take a stand, said Pfefferle.