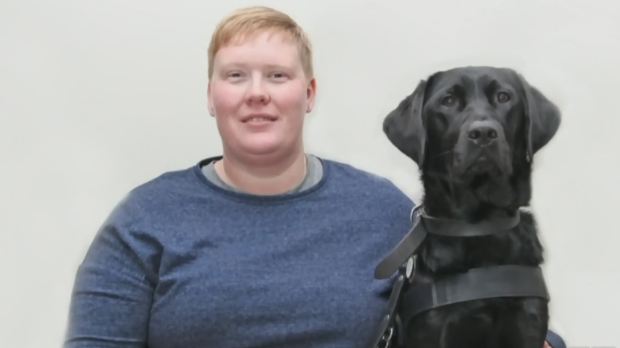 For almost five months, Ashley Nemeth has used sugar cane after her servant's dog was beaten by a cyclist and forced to retire.

But now he is a proud new handler of two-year-old Danson – one of six dog graduates recently from the New National Institute for the Blind (CNIB) dog guide dog program.

"I just feel like I can move faster and more freely with guide dogs," Nemeth, the lead CNIB program for southern Saskatchewan, told CTV Regina on Friday.

He did not have a guide dog when his service dog, Rick, was forced to retire after his feet were controlled by cyclists in July.

"He is my first guide dog and I feel like I can go anywhere and do anything," he said in the summer.

The accident caused Rick to suffer from anxiety and stress and was forced to retire early. And even though the dog was sent to a nice new home, this made Nemeth pinched.

"So that I can travel safely, I have to find out where I am. Being a fire hydrant, fire pole, cracks on the sidewalk, I have to find these objects to navigate," he said.

But now with Danson by his side, Nemeth didn't need to worry about those things.

Danson is trained to avoid obstacles and guide him. He also helped with daily tasks such as starting work and bringing his children to school.

"Board sandwich marks on the sidewalk, people don't shovel their sidewalks. All the things that keep blocking you are a big danger with white sticks," said Nemeth. "Whereas with guide dogs, sometimes you don't even know they are there because he avoided it."

Apart from all the assistance Danson gave, once they were at home and he was not active and Nemeth said "he can play with children and become a dog."

But at work, Nemeth warns people that although Danson and other trained guide dogs may seem tempted to keep pets: "ignore dogs completely."

"That includes stroking, barking, attracting their attention in any way. If dogs see you, they don't focus on their work, "Nemeth explained. "You will never take care of my white stick. So please don't take care of my dog. "

Even though CNIB has been operating for more than a hundred years, it only implemented a new guide dog school program 18 months ago. CNIB told CTV Regina that they wanted to offer more options in Canada specifically for visual and blind clients.

A common choice for disability assistance dogs is Labrador and Golden Retriever because trainers say they are adaptable, fun, and have a strong work ethic.

But public perception plays a role too.

"People might be more willing to help someone who might have a lab or golden retriever besides maybe a breed they don't know or are comfortable with," CNIB guided dog trainer Shona Kemp to CTV Regina.

CNIB said it plans to continue the new program next year.

With a report from CTV Regina Colton Wiens