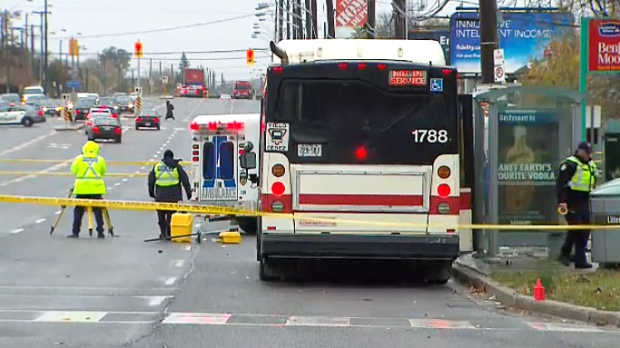 A woman was killed after she was hit by a vehicle mounted on a sidewalk near a Scarborough bus stop on Friday morning.

It happened at the Birchmount and Ellesmere crossroads just before 7am.

"At that time, there was a female pedestrian, who was shocked by this vehicle."

The 59-year-old woman died at the scene.

The driver then continued, said Crews, hitting light poles and bushes before colliding with a 32-year-old male pedestrian in the area.

"He suffered several serious injuries, but it was not life threatening," Crews said.

Paramedics transport men to local trauma centers with injuries that are not life threatening.

The car stopped at the nearest parking lot, west of Birchmount Road.

The female driver remained at the scene and was then taken to the hospital for chest pain.

Crews said investigators were investigating the situation that caused the collision.

"Our investigators see all aspects of this impact, of course, whether it's a mechanical defect or a medical situation," he said.

"They are open to anything and everything is related to investigation."

He urged anyone who might have witnessed the accident to contact the police or Crime Stoppers anonymously.

"We know that dash cameras are becoming very popular now. So if there are people around 6:30 and 6:39 this morning and have a dash camera that might have caught this collision in the video, we ask you to contact our investigator too, "he said.

Traffic is diverted in the area while the police conduct an investigation.