No contract talks yet between Jake Muzzin, Toronto Maple Leafs 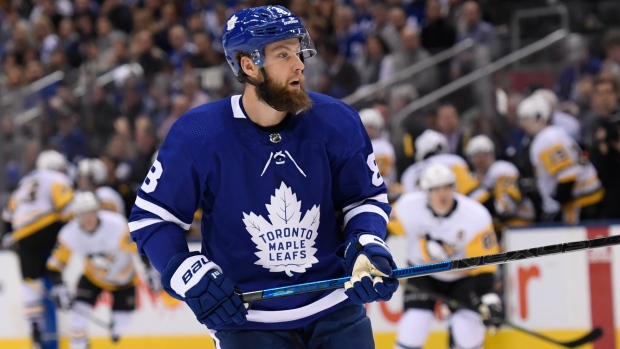 The Toronto Maple Leafs have just one defender on their current 23-man roster under contract beyond this season in alternate captain Morgan Rielly, but according to TSN Hockey Insider Pierre Lebrun, the team appears to be taking a patient approach to contract negotiations.

"Yeah, that's going to be the challenge for the Toronto Maple Leafs with their salary cap. Three of their top four defense (are) pending UFAs," LeBrun said on Insider Trading. "Jake Muzzin, their best defender early this season, there have been no contract talks at all. Not this summer. Not early in the season between his camp and the Toronto Maple Leafs. Understandable, the Leafs had other priorities named (Mitch) Marner to take care of.

"Here's the thing. Because Tyson Barrie and Codi Ceci are newcomers, I think the Leafs' front office wants to take a little time and look at how everyone fits on this blueline. They can't sign all three. They may not even be able to sign two. Prioritize the guy you are going to go after, perhaps in the new year, and go from there. "

The Leafs' No. 1 priority should be extending Jake Muzzin. Easily their best defender. He'd be mighty tough to replace in that lineup.

According to CapFriendly, the Maple Leafs currently has $ 65.59 million in salary committed to 11 players for next season.