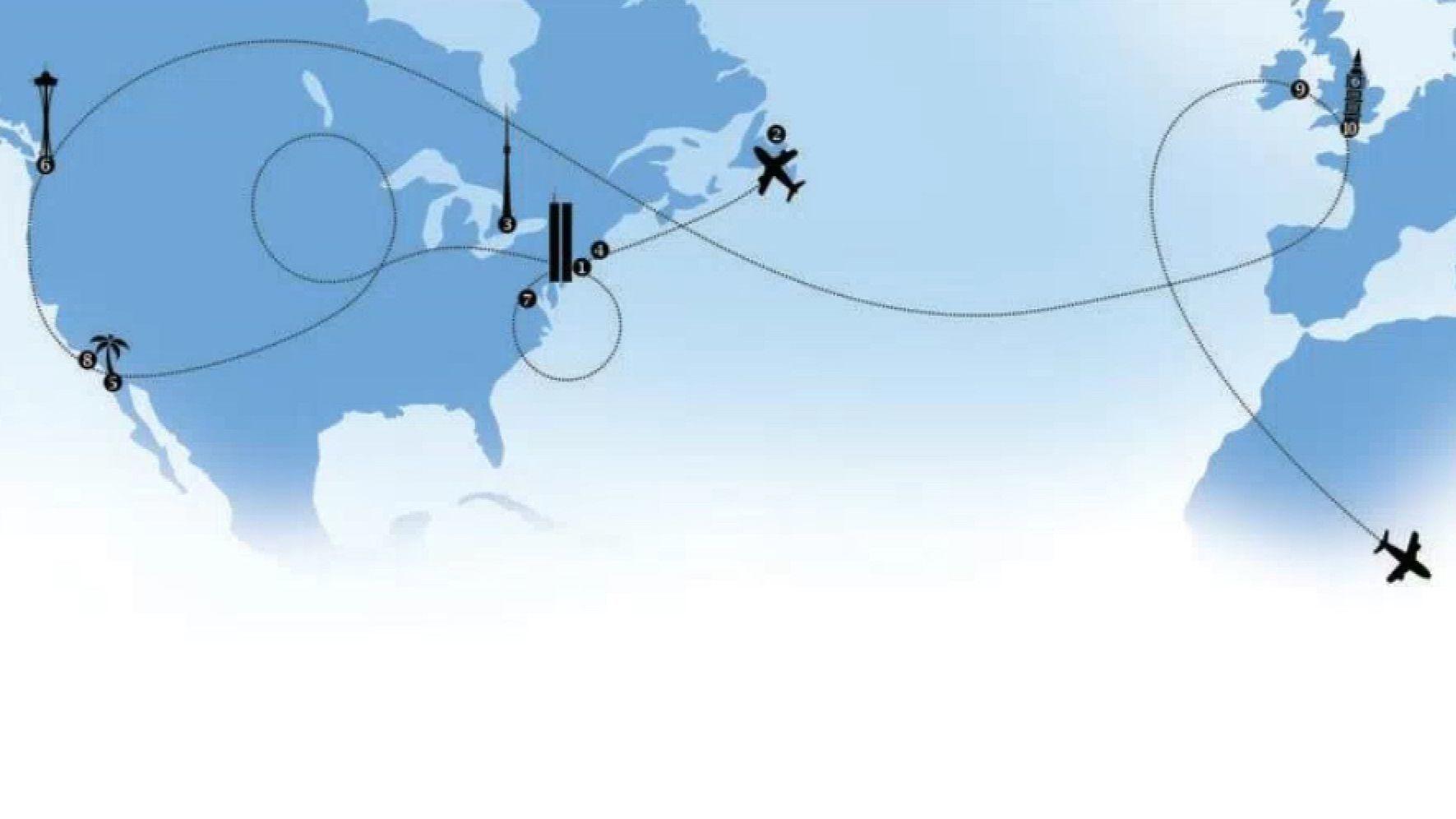 The concept for the La Jolla Playhouse musical "Come From Away" began from an extraordinary tragedy day, but the creation of the event did not really begin until a decade after the horrific 9/11 event.

Now, work has gone from La Jolla to Broadway and back to California (on tour), and is now being performed overseas as well. Next is step by step to see how it all happened. (Numbers correspond to locations on the map above.)

Also be sure to see our main section on the event trip here, including interviews with some of the people who made it happen.

1. September 11, 2001: After the terrorist attacks in the US and the next "stoppage" of all air traffic, 38 jet planes carrying thousands of people were transferred to the small town of Gander, Newfoundland. The last plane finally departed five days later.

2. September 2011: Irene Sankoff and David Hein, a married couple of writers from Canada, attended a 10-year reunion of "airplane people" at Gander, and began interviewing them.

3. April 2012: The initial version of Sankoff and Hein "Come From Away" received his first development performance at Sheridan College in Oakville, Ontario, through the Canadian Music Theater Project.

Creators along with "Come From Away" David Hein and Irene Sankoff attended the opening of the event in Toronto in 2016.a (Richard Lautens / Toronto Star via Getty Images)

October 2013: This event was chosen for the annual National Alliance for Musical Theater festival in New York City, and received a 45-minute performance. This work was later chosen by Junkyard Dog Productions, which also resulted in Broadway staging of the La Jolla Playhouse-raised "Memphis."

5. November 2014: The world premiere of "Come From Away" was announced as part of the 2015-16 La Jolla Playhouse season, with Playhouse artistic director Christopher Ashley (who also directs "Memphis") at the helm. This event is a joint production with the Seattle Repertory Theater.

June 11 2015: "Come From Away" has an official opening at the Playhouse's Sheila and Hughes Potiker Theater.

7. September 2016: His music moved to the historic Ford Theater in Washington, D.C.

October 2016: "Come From Away" was presented in two concert shows in the ice rink city of Gander, for around 5,000 residents. The show brought the whole city up, and took the house down.

November 2016: The show opened at the Royal Alexandra Theater in Toronto, its last production before Broadway.

February 4, 2017: The players returned to San Diego briefly for a concert performance at the La Jolla Playhouse gala.

March 12, 2017: "Come From Away" officially opened on Broadway (where he continues to walk).

June 11, 2017: The event – nominated for seven Tony Awards – won one for Ashley as the best musical director.

October 2017: Broadway production "Come From Away" regained a $ 12 million investment.

February 2018: "Come From Away" returned to Toronto for an extended production of "sit-down".

8. November 2018: "Come From Away" returned to Southern California for the first time since the world's premier Playhouse, opening a six-week tour at the Ahmanson Theater in Los Angeles. (This tour will also stop in San Francisco in January and Costa Mesa in February, but no San Diego engagement is scheduled.)

9. December 2018: "Come From Away" is set to open a road in Dublin, Ireland, before heading to London's West End.

10. 2019: Production is scheduled to open in London and in Melbourne, Australia.