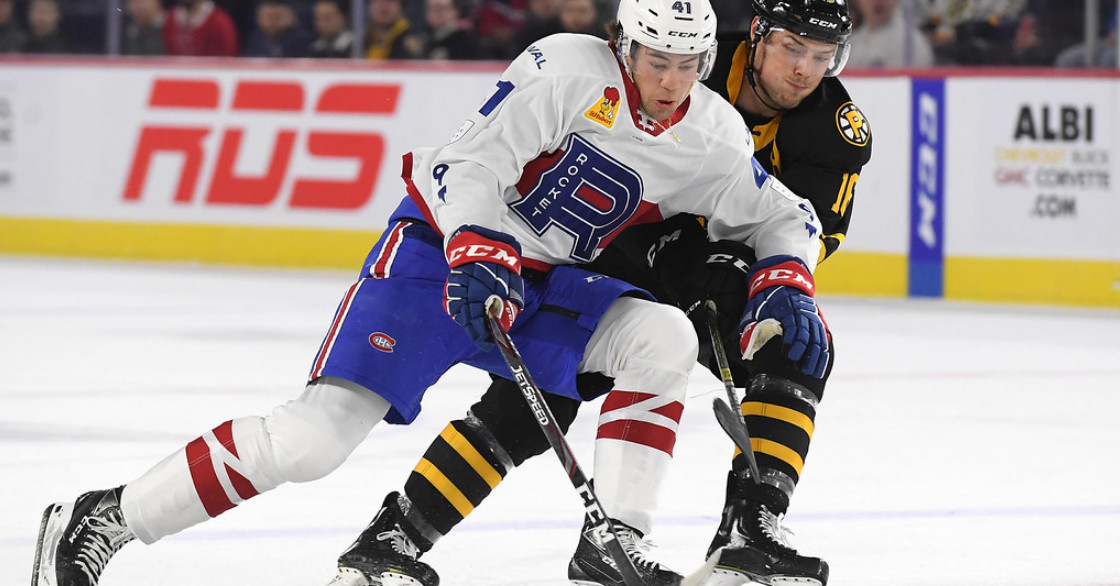 A busy week continued for the Laval Rocket as they welcomed the Providence Bruins back to Place Bell for a second time in three days. The Rocket were flying high after consecutive wins, most recently in a shootout over the Bruins on Wednesday night. Joël Bouchard's club was looking to avoid the mistakes that cost them their four-goal lead in that contest, but also to build on the offensive outburst they enjoyed in the first period of the same game.

Between the pipes last night was Cayden Primeau for the Rocket, and he was looking for his second win of the year after notching his first professional victory on Monday against the Rockford IceHogs. Besides the change in the net, the only major lineup change was Alexandre Alain drawing in the fourth line for Michael Pezzetta.

The Rocket again started quickly, placing Bruins netminder Maxime Lagace under heavy pressure with the third and fourth lines out, which led to the opening goal of the contest. Maxim Lamarche fired a hard shot from his spot on the blue line and it destroyed a stick on the way to the net. From there, Alain swatted the puck home for his first goal of the year.

A scary moment broke up the play after that however. Brendan Gaunce collided with Michael McCarron while skating through the neutral zone. Gaunce was seemingly knocked out immediately as his face hit the ice. He tried to skate off on his own, but he eventually required a stretcher to get off the ice.

Primeau was sharp, turning away Ryan Fitzgerald in close to keep the Rocket in the lead, and was highly active as a strong Bruins attack battled away looking for a tying goal.

A lack of discipline by the Bruins helped to increase the Rocket's first-period lead. Nikita Jevpalovs flew in as part of a three-on-one rush, and Jakub Zboril was beaten to the net and took it upon himself to crosscheck the Latvian into the goal post instead. On the ensuing power play, Alex Belzile found Dale Weise streaking to the net off the wing and the veteran forward beat Lagace to double the Laval lead.

The Bruins managed to cut back into the lead a few minutes later with a bit of zone time and solid cycle play. Fitzgerald teed up a shot for Alex Petrovic, who blasted his first of the year by Primeau.

More undisciplined play from Providence led to a second Rocket power play, this time with Chris Breen throwing Riley Barber headfirst into the net when the Laval forward gained inside leverage on him. The throw knocked the net off its moorings, and disallowed Josh Brook's follow-up shot from being a goal.

On the man advantage, it looked as though the Rocket added a third goal, but the ref waved it off, causing a loud protest from the Laval bench. The period ended with Laval carrying a one-goal lead, and the game getting much more physical.

The second period didn't begin quite the way Laval would have liked, with Otto Leskinen firing the puck out of play to send Providence to their first power play of the game. The Rocket penalty kill continues their strong work, killing off the Bruins' man's advantages and keeping their lead intact as the second period ticked away.

While neither side made much headway on offence for much of the period, the Bruins found a tying goal late, albeit on a play that would have likely been challenged at the NHL level. A shot by Petrovic was saved by Primeau, who was also being run into by Trent Frederic. As the goaltender tried to recover and cover up the puck, Fitzgerald lifted the puck into the net. Without the ability to review for interference, the goal was left to stand, leaving the Rocket to try to get their lead back with the third period looming.

Former St. John’s IceCaps defenceman Josiah Didier gave them just the chance to do that, taking a kneeing penalty with a little over two minutes left in the second. A quick chance between Phil Varone and Barber almost restored the Laval advantage, but a quick reaction from Lagace denied them. From there, the Rocket failed to find their legs with the extra man, and even surrendered a few dangerous rushes due to forced passes in the offensive zone. With the penalty killed off both teams headed into the second intermission in search of a way to grab the lead in the third period.

Charles Hudon nearly broke the tie in the opening minutes, taking a breakaway feed into the Bruins' zone, but only managed to get the heel of his stick on the shot, harmlessly trickling it in on Lagace.

Alain was whistled for hooking, giving the Bruins an early opportunity of their own to take the lead in the third period. Big saves from Primeau and a short-handed rush by Ryan Poehling killed off the minor penalty without much issue and sent the play back to five-on-five.

Barber was soon denied on a breakaway chance of his own, but the Rocket found their breakthrough thanks to some incredible efforts from Poehling. The rookie forward stripped a Bruin of the puck and darted into the offensive zone where he uncorked a wicked shot to put Laval back on top 3-2.

The Rocket's defense continues to keep the pressure up, swarming Providence puck-carriers in all three zones, not allowing them to generate much of a counter-attack with the minutes ticking away. A steadfast Primeau fought off a last-ditch Bruins attack with the net empty, and secured a big win for the Rocket, their third in a row.

Next on the docket is a Saturday-night showdown with the Hershey Bears at 7:00 PM. Charlie Lindgren is the expected starter.