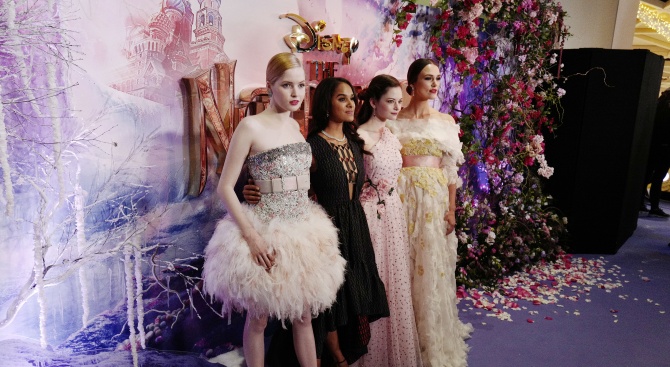 Inspired by Ernst Hoffman's classic 1916 fairy tale, "The Nutcracker and the Four Kingdoms", is the most watched film since last weekend, according to a film summary.

The three-dimensional story of a girl brought to the world of magic by her rats in the ceiling was watched by 18,176 spectators and there were 189,636 leva's income for the first three days in Bulgaria.

Second is the Drama of Biography of Bohemian Rhapsody. The story of Freddie Mercury since the creation of Quinn until a big charity concert in 1985 has been going on for ten days on screen in Bulgaria, with 48,324 spectators and 472,956 levas.

The third position is for Venum's action in the Marvel comics of the 80s and 90s of the last century. Tom Hardy in the lead role of the superstar who had to meet Spiderman had seen 126,070 viewers and had 1,377,949 income from their tickets for one and a half months in Bulgaria.

Fourth, "Mystery of the House with a Clock," based on a childhood novel by John Belers in the 70s. What happened to Little Lewis after moving to his uncle Jonathan in the glorified house was the fourth week of the screen in Bulgaria and for the time being watched by 43,031 spectators and collecting 363,243 people from their tickets.

The fifth is for the animation "Lewis and the Aliens". German film about teenage girl Luis, who befriends three extraterrestrials who hit the building where they live, was watched by 16,973 viewers and had 167,351 leva income for three weeks in Bulgaria.

Sixth among the most watched films in Bulgaria was the second premiere of last weekend – "The Girl in the Spiderweb" made by the book "What Does Not Kill Us" by Swedish writer David Lagerkrantz and sequel to the Millennium series. A new story about Lisbeth Salander and journalist Michael Blomkvist has been seen by 2,835 spectators and has 26,837 leva from their tickets for the first three days in Bulgaria.

Seventh is the action of "The Destroyer" in George Wallace and Don Keith's book. The story of saving the Russian president in an attempted coup by an American submarine team and a group of navy seals shot in our country and in England were watched by 16,413 spectators and had 148,306 leva revenues over three weeks in Bulgaria.

The eighth in the Top 10 is for "Born Star" music with Lady Gaga and Bradley Cooper in the lead role. The third remake of the 30-year-old film of the same name, which tells of a young star assisted by musicians who ended their careers, was seen by 31,666 spectators, and there were 295,749 income per month and half on screen in Bulgaria. .

The ninth place is for Wiley's animation. The rivalry between Wiley's ex-TIRANIN and former racing cars was watched by 5,864 spectators and there were 53,935 of Leva's revenues for two weeks in Bulgaria.

The tenth place is the "Little Step" animation. For seven weeks on screen in Bulgaria, the story of yoga Mito and Percy Man, in which both tried to unite the two nearby worlds, was seen by 67,977 spectators and there were 629,488 people from their tickets.