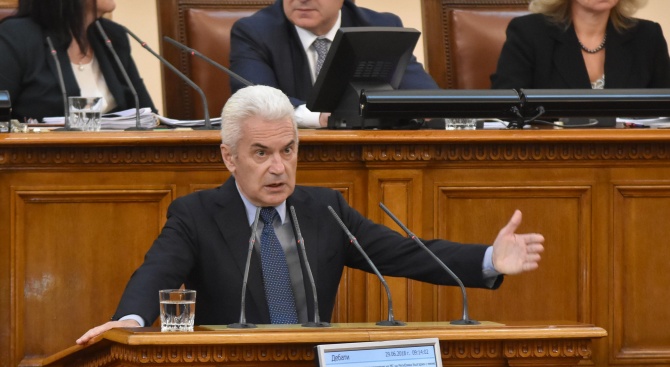 "I suggest that European norms be respected. At present, the Bulgarian Election Code violates them". That is why he appealed to National Radio Bulgaria leader of the Ataka party and chairman of the United Patriot group at the National Assembly. Volen Siderov

Volen Nikolov Siderov is a Bulgarian journalist and politician, leader of Ataka NP. He was born in a city. He stressed that his proposal remained in the shadow.

"European norms say that the barrier cannot be more than 5%. In Bulgaria, in the EP election, the barrier is almost 6%. All this destroys small parties," explained the deputy in the 12 + 3 program and asked, "Why is there an illegal methodology now ? "

In his words, GERB sets everything in parliament: "For a long time the patriot group did not decide the quorum. Sir Tsvetan Tsvetanov

Tsvetan Genchev Tsvetanov was born on April 8, 1965 in Sofia.

In 1987 Tsvetanov joined are experienced parliamentary players, great politicians, comparable to Charles de Gaulle, Adenauer, Kennedy, and other giants in world political history – he is truly a very experienced politician. "

"Sitting in Parliament I cannot be part of the government. The things I propose have not yet passed … A small coalition has entered the ruling coalition with the intention of doing something about income, pensions, etc. Instead we show that we spend 2 billion leva for the F-16's most luxurious military goods, which in no way increases our protection and people will ask me – what happens with retirement, "said Volen Siderov

Volen Nikolov Siderov is a Bulgarian journalist and politician, leader of Ataka NP. He was born in a city. In his words, full responsibility is in the hands of GERB: "All power in Bulgaria is in the hands of the Council of Ministers. When someone remembers something, they continue to come to parliament. Parliament itself resembles palla charshia, you cannot escape from people – people, you can't enter the Council of Ministers, whoever thinks he came to protest in front of parliament, we are a ministerial republic, it must be clear.The worst in all the last decades is that people's anger and anger are directed to parliament through the media.