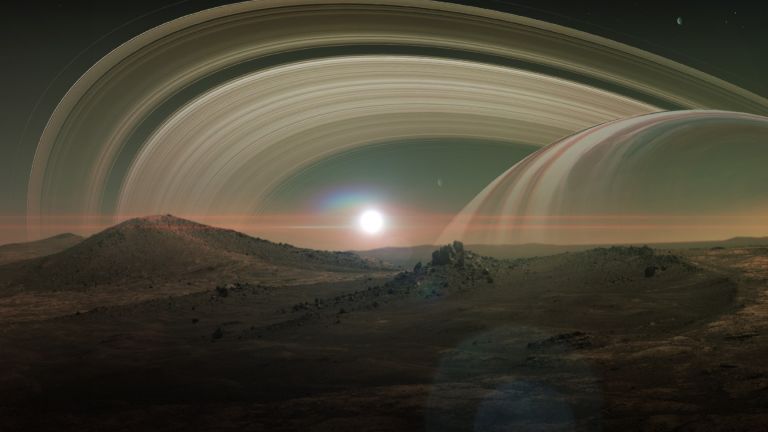 True, this liquid is not water but is thawed under very cold and eternal methane conditions.

Covered in a dense and opaque atmosphere, Titan is the first celestial body in the solar system with signs of seasonal changes and even clouds detected by Cassini probes. Titan consists of ice and rock and is the second largest satellite in the solar system after Ganymede, Jupiter's companion.

Titan is larger than Mercury, but much lighter.

>>> See pictures and illustrations of Saturn and his friends >>>

Surface temperature around 94 K (almost minus 180 degrees Celsius), which is too low for ice sublimation and hence water vapor is not in the atmosphere. In the lower layers of the atmosphere there are scattered clouds consisting mainly of methane and ethane.

In the previous and next picture, nothing like this has ever been noticed and scientists came to the conclusion that this might be dazzling on a moist surface from summer rain.

The length of Titan day is 15.9 Earth days, the year is 29.5 Earth years, and each season is around seven and a half years of the Earth. The rain on it consists of methane drops that fall into a rough rocky valley and then evaporate. Photographs taken by Cassini around the North Pole are seen and listed more than 400 lakes and oceans consisting of liquid methane.

Except Titan, for some types meteorological time we can talk to a few more planets in the solar system, but rainfall in the liquid phase, though not through water, is only there, except on our Earth.

It is possible that water in the liquid phase also has Enceladus, another Saturn colleague, but it is deep below the surface, covered by several kilometers of ice, and Europe – also under thick ice, not on the surface.