It's time for theatrical adventure – Varna 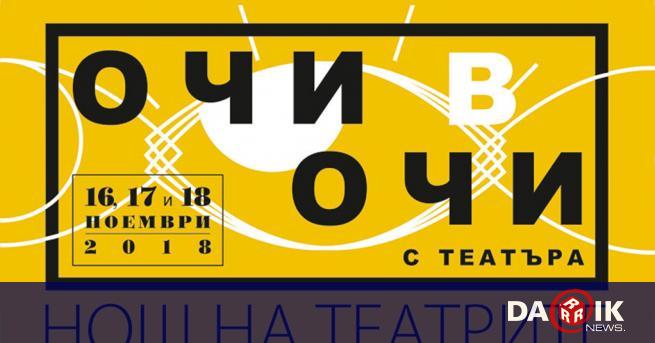 
Theater night starts today in Varna. Traditionally, the Theatrical-Musical Production Center is part of this anticipated event which takes place every fall at the same time in different European countries.

The 2018 theater night will be held on November 17, but in Varna because of the large audience interest, it will continue on November 18, and on November 16 there will be two flashbobs – the Varna dance theater and graduates of the "Studio Theater" by Milena Kaneva, who will direct villagers to the adventures of the upcoming theater.

The program includes the latest production of the Dragon Theater Drama Theater by Evgeni Schwarz directed by Yavor Gardev, "The Choice of Martha" this year by George Galseran directed by Georgi Mihalkov and a favorite of young music audiences "A dangerous adventure with hero lovers" directed by Kostadin Bandutov.

Especially for Montenegro's "Night Theater", the production of the Royal Theater in Cetinje "Capital" in Marx, political insinuation with director Andras Urban arrived. The new ballet formation for contemporary choreography, Varna dance theater will feature its first appearance "Behind the Announcements" by the choreography of Nadya Dimokova.

Before each performance at the Main Stage and Filial Stage, young talents from Stoyan Radev Theater and Vesselina Mihalkova Studios will become direct models and wear stage costumes by Mira Kalanova from "Bremen", "Richard III", "Revizor", "Mother" and " Uncle Vanyo "will welcome the audience. Time for photos and villages, which, as in the previous edition of Malam Bioskop, will appear on the Facebook page of the Bachvarov Drama Stoyan Theater. The most preferred photo writer will receive an invitation to the theater.

This is it Complete program for Night Cinema – Varna 2018:

November 16 17.00 – FLASHMOB "FOR ADS"
Location – Pillars for posters and announcements to the Naval Club

November 17, 6 pm, Main Stage – "CAPITAL"
The surprise at Varna Night of Theaters will be an interesting tour of the Royal Montenegrin Theater "Zett Dom" in Cetinje, Montenegro with political satire "Capital" by Karl Marx. Political satire is translated into the contemporary context, the question posed by the famous philosopher in his work "Where are the men here?" Directing, adapting and the visual environment of Andras Urban, playwright Vedran Bozinovic, starring Jelena Laban, Jelena Shestovic, Stevan Vukovic, Pavle Prelevich. This project was carried out under the European Union Creative European program. The visit of the Royal Montenegrin Theater was in response to the Varna Drama Theater tour on Cetine with Mark "One-eyed King" by Mark Kreuett, read by director Peter Denchev.

November 17, 8:00, Affiliate Stage –MARTA CHOICE"
"The Choice of Martha" by the famous Catalan playwright, Jordi Galseran, is an interesting offer for Saturday. Thrilling thriller and virtuoso game of love and choice, only for the taste of director Georgi Mihalkov. Translating Neva Micheva, set the design and costume of Petar Mitev, with the participation of extraordinary actors Simeon Lyutakov, Yana Marinova, Nikolay Kenarov, Valentin Mitev, and Rozalia Aqgaryan.

November 17-18, before each show – MANIKIN DIRECT

Stage costume demonstrations by Mira Kalanova from the shows "Bremen", "Richard III", "Revizor", "Puppet" and "Unco Vanyo", with the participation of graduates from the "Studio Theater".