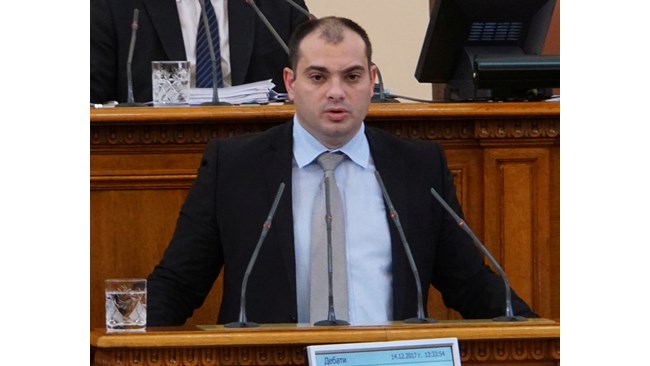 A few minutes disappeared against Desislava Atanasova, Delyan Dobrev, Krasimir Velchev and Anton Todorov, quoting "revelations" from sites that warned themselves that they were fake news editions and had no reporters

Will this be a blow to freedom of speech if the Interior Ministry checks who owns "Vale News" and informiran.net? This scheme resembles a "Dangerous" site, but has been built with a different name?

The absurd sites run unreasonable revelations by explicitly warning that they are fake press releases and do not have reporters to examine the facts.

For BSP MP anonymous Philip Popov "Vale News" and informiran.net are reliable media where enemies can be attacked.

They argued that Desislava Atanasova, Delyan Dobrev, Krassimir Velchev and former deputy Anton Todorov had received apartments and offices in the Tsarsko Selo complex and others in the capital.

A few minutes after 36-year-old MP Vidin, Filip Popov, announced on behalf of BSP on the sidelines of the parliament that "we asked the Commission to Oppose Corruption and Confiscation of Unauthorized Property (CPCNPP) to refer and review publications in the media regarding apartments "of the four GERB politicians, sites that cite fake news, delete them.

In fact, MP Popov, without naming the media, quoted a publication on the site which was anonymous owner

they have written themselves,

that they are fake

For the first time, "revelations" appeared on the 4udoslav blog, showing a "24 hour" check. "To defeat corrupt power with speech (not necessarily with truth)" is the slogan of this blog written on the page.

This publication was reprinted from the Vale News website, which read: "Fake News and Absolute Fiction Edition. Don't believe this is not true." After that, false news appeared on the information site, which lied about the island of Borisov in Greece. There is still important clarification "The Informiran.net team does not have the resources to examine information that reaches the editorial office, and does not guarantee authenticity, so the source is listed at the end of each article and unless it belongs to the author. It may be that this article is not true, and the similarities with the face and actual events are coincidences. "

But this clear warning did not stop brave MP Philip Popov.

"Allegations in the media are serious about corruption and conflicts of interest. The task of the commission is to examine," he told reporters in parliament.

The GERB attackers, however, responded immediately.

If I go to "Tsarsko Selo" (where the apartment matches a fake site), I will resign, "said Desislava Atanasova.

Since 2009 I have been in the National Assembly, before I was a member of the municipal council and all of my time has been disclosed to the public, "he said.

"The same site announced that the same lawmaker from GERB was connected to DS. I was born in October 1978, and when DC was no longer functioning, I was 11 years old. My question is whether DS has recruited babies and minors, "Atanasova asked. He also showed documents from the document committee that he was not a DS agent.

Anton Todorov wrote on his Facebook profile: "BSP is an idiot! How could a weak feke be disseminated and commented on at all in the Bulgarian Parliament? It's embarrassing and falls invisible!"

"The funniest thing about this truly false news is that I was on the DS. In 1990, when the State Security was closed, I was 12. In the same style I hoped to write and that I participated in the First World War or in the Revolution October from the enemy.

"24 hours" the Interior Ministry asked whether it would be triggered in this situation. MP asked the Anti-Corruption Commission to examine the facts on an anonymous site and claim to offer false news and no reporters. This model is reminiscent of the "Dangerous" site, which was examined by SANS in 2008 after a series of public figures. Then there is a wave of dissatisfaction that this is a way to talk about free speech. The agency explained that they had checked the leak of confidential information.

There is no legal text to pursue such a site, the Interior Ministry commented "24 hours". Affected people can sue them for defamation with personal claims. However, they cannot find out who did it – the Electronic Communications Law requires vendors to disclose the identity of the publisher only in serious crimes, and defamation is not like that.

Computer speculators suspect that these sites exist to disseminate such "information" about political opponents, which are then cited and used to bring state institutions to scrutiny.

A little later at night, when it became clear that feeder anger was gaining momentum on the network, Vallet News's site mocked the deputies, justifying it:

In connection with another demonstration of low culture in the National Assembly, where leaders and opposition accuse each other of the apartment, we set it as follows:

1. This site publishes VARIOUS NEWS, but this is the only condition. We do not check credibility news. The goal is just INTERESTING and nothing more.

2. Because we assume that we can also publish fake news, so clearly at the head of the site we have written a warning not to take it seriously.

3. News about 4 MPs from GERB is not ours. Obviously the source is written in it, we always write news sources that we borrow. There must be respect for copyright and those who try to write.

In certain cases, we again determine where this news was made (and others from there), they write from the site and acknowledge that they have taken the text from 4udoslav.

Filip Popov was only 36 years old, but he had driven a third term as a representative of his original Vidin. Young lawyers entered politics as protectors of former parliamentary boss and Cornelia Ninova's predecessor in the chair of leader Mikhail Mikov. For several years he was personally promoted by Mikov to politicians and the media. And Popov himself praised him that he worked a lot for his area – Vidin.

But when Mikov was overthrown, the young MP turned quickly to Ninova. And announced that BSP is in the right direction with it. In contrast to the media he read, "24 Hours" found its revelation in Mikhail Mikov's personal blog and FOCUS News Agency, where on June 10, 2018 BSP parliamentary group secretary hoped leaders would continue to share the same spirit, and hope for success.