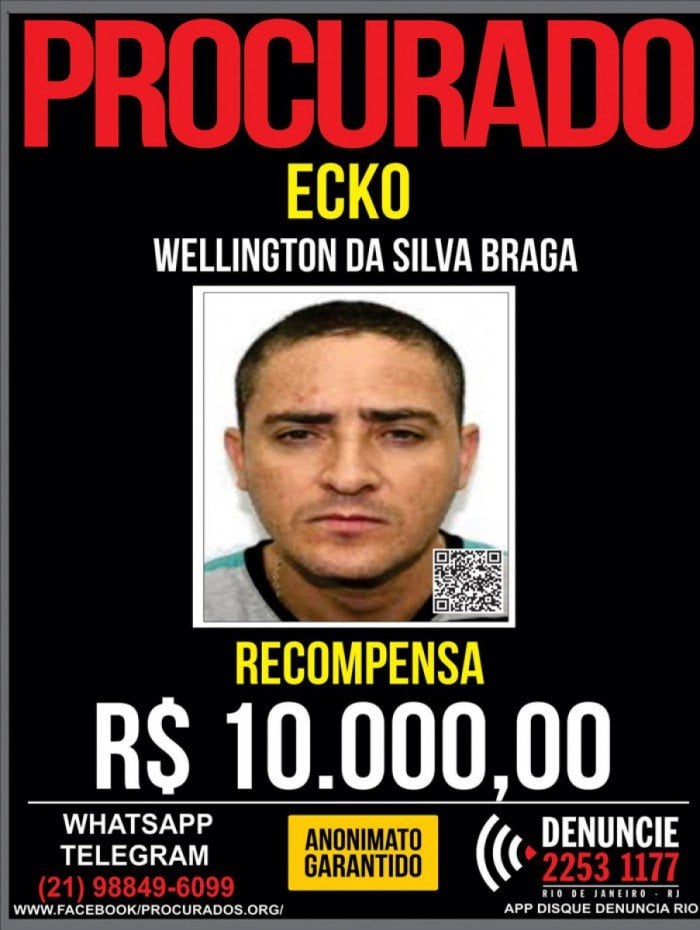 Rio – Portal Wanted has increased prizes for those who helped the Office of Murder of Baixada Fluminense (DHBF) and Organized Crime Suppression Service (Draco) with information that led to the arrest of Wellington da Silva Braga, Ecko. Previously, the prize was R $ 2 thousand.

Prohibited, Ecko is considered a militia leader called the "Justice League", which acts in several areas in the West Zone and Baixada Fluminense. There is a warrant against him for the crime of murder.

Ecko's rise to being the commander of the biggest militia in Rio took place after the death of his brother, Carlos Alexandre Braga, Carlinhos Três Pontes. According to the Wanted Portal, Ecko is "a user of cocaine, profits from drug trafficking, has a violent profile, and has a place to torture his rivals. He also often co-opts ex-traffickers for his gang."

According to the investigation, the Ecko group has an alliance with criminals from the Third Pure Command (TCP). They let trafficking traders work in the favela, with drug-free sales but want a share of the profits.

According to the militia hierarchy, Danilo Dias, Tandera, controlled the group business in Nova Iguaçu and Seropédica.

The General Ministry of the State of Rio de Janeiro (MPRJ) has criticized and called for preventative detention of militias working in the West Zone and in Baixada Fluminense. In an operation in June this year from Civil Police, ten people were arrested in Unlawful Operations, among them a military and former police officer, and three prison guards. The gang is said to be responsible for removing the largest smuggling network of Paraguay smuggled cigarettes in the state.

Investigations show that Ecko will also have a tobacco seller, and its monthly income from the trade in illegal tobacco is estimated at R $ 1.5 million.

The imposition of fake cigarettes is another branch that is exploited by criminal groups, which controls, inter alia, underground cable TV and the internet, alternative transportation, private security, division of illegal urban land, corruption and co-optation of public agents, stolen vehicles, illegal gun ownership, in among other crimes, which are regulated in the Criminal Code.

In October this year, agents from the Environmental Protection Agency (DPMA) conducted an operation against illegal revocation and sale of sand in Santa Cruz, in the Rio West Zone. Illegal activities controlled by "Ecko" will be behind the earthworks company in the West Zone in the name of "oranges." Legitalized companies will be forced to buy materials extracted by bandits.

Some hills have been moved and many trees have been picked. The area explored by criminals has been destroyed. The area was banned and, alongside the tractor, two trucks and a notebook with business records the package was confiscated by the police.

In a recent DHBF operation, Nilton da Silva Sabino, 25, known as Pingo and appointed a trusted man from the Ecko militia, was killed in a confrontation with specialist agents. The shooting took place during an operation in the Guaratiba neighborhood, in the Rio West Zone. The action also counted the participation of agents from the Civil Police Operations Office, who also acted in the war against the militias in Rio.

Anyone who has any information about the location of the Ecko militia and his group can report the following channels: Whatsapp or Telegram of Wanted (21) 96802-1650; by facebook / (inbox), address: https://www.facebook.com/procurados.org/, by the service desk of Dial-Denunciation (21) 2253-1177, or through the mobile application – Dial Recitation. Anonymity guaranteed.