SSD as a RAM extension for the server 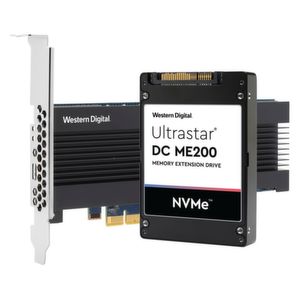 Ultrastar DC-ME200 series SSD brings Western Digital Flash memory to the market, expanding memory on Linux servers. With them, manufacturers want to benefit from the ever-expanding computing market in memory.

Even though SSDs are significantly slower than DDR memory modules, they are cheaper and allow higher storage capacity. With the Ultrastar DC-ME200 series, Western Digital has developed an SSD that works with DRAM in storage pools. Ultrastar DC ME200, short for "ME" stands for "Memory Extension", available with capacities of one, two or four TiB. The manufacturer offers SSDs in two designs: in 2.5-inch format with U.2 interface and as a half-high PCIe 3.0 card. It consists of planar 15nm MLC NAND and therefore must have high durability, which is between 19 and 78 Petabytes Written (PBW), depending on capacity.

Up to 24 TiB on dual CPU servers

According to Western Digital, the in-memory system on a 1U dual-CPU server allows for memory expansion of up to 24 TiB. For 2U systems with four CPUs, 48 ​​TiB is possible, for 4U systems with 8 processors up to 96 TiB. One TiB (tebibyte) is equal to 240 Bytes. This capacity is around 0.9 TB (terabytes).

Ultrastar DC-ME200 SSD is currently only available with Intel Xeon processors from E5 v3 and above. The operating system supports various Linux distributions. Typical applications for the Ultrastar DC-ME200 series, manufacturers see applications in memory such as Redis, Memcached, Apache Spark, and large databases. Memory management software specifically handles the combination of DRAM and SSD in a shared memory pool. It uses machine learning, pattern recognition, code scanning and other techniques to provide high performance through massive forced retrieval. Ultrastar DC-ME200 series is available in Western Digital and is being tested by selected customers.