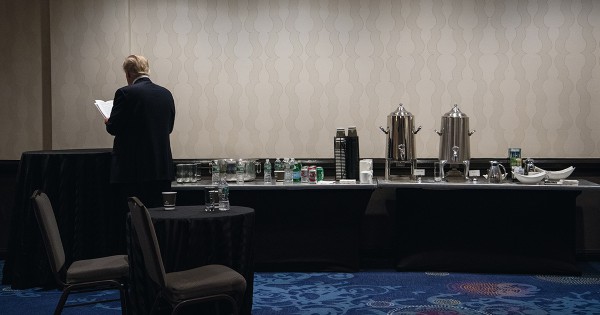 Voices warning of the possibility of a recession in the US economy for 2019 or 2020 are still accumulating. Analyst from Bloomberg, Forbes and The Wall Street Journal have warned that, at least, we will see an important slowdown. Warning begins to be heard at the end of the first quarter of this year, and for September 30 Bloomberg centenci: "Two-thirds of business economists in the United States see a recession at the end of 2020."

On Monday, General Motors, the largest automaker in the US, announced it would lay off 15% of its workforce and close factories in the United States and Canada. This is a brutal blow to Trump's economic message, and a clear sign that the automotive giant has a negative analysis of the economic future. Today at the first press conference held a few weeks from the White House, Larry Kudlow, Trump's main economic adviser, said the president felt that GM "refused", after the Republican Party agreed to last year's cuts. historical fiscal that benefits large companies.

Among the possible recession indicators are the short and long-term returns on the Fed debt bond curve. When the economy is healthy, long-term debt pays better than in the short term, namely above in the graph. That the gap between the two starts to close may be a negative signal, although this is not axiom, only an indicator of a possible problem.

LPO consulted with Olugbenga Ajilore, the Chief Economist from the Center for American Progress, one of think tank the most influential liberal in the US Founded in 2003 by John Podesta, a strong member of the Democratic Party who served as Chief of Staff for Bill Clinton, adviser to President Obama, and president of the Hillary Clinton campaign in 2016.

How likely is the recession next year?

I don't know whether in 2019, but in 2020 it's very possible. There are many factors. Rates hit the economy very hard, interest rates, among others.

Yesterday General Motors, the second largest shipbuilder in the US, made a devastating announcement. Cover some of your plants and cut 15% from your staff. Do you think GM is in a hurry? Do you think of it as another sign of what will happen to the economy in the near future? Respond to changes in the market?

The automotive market has changed a lot crossovers, SUVs, and big trucks. Maybe they go ahead, but they are also very worried and trying to anticipate the future of the economy, and if that means closing factories and factories, that is what they will do.

How serious is what General Motors announced?

I want to emphasize, now that we are talking about General Motors, GM is one company that benefits from tax cuts. People talk about how they go to buy back shares [con el dinero del recorte], but no one showed concern for the workers. We are talking about 14 or 15 thousand people who did not work, and as we have seen, when the assemblers closed their factories, people in these cities suffered greatly to get back up. We will have many people who suffer and try to get up, we have to concentrate on them and find out what we can do for people who have lost their jobs. We can't forget them.

Do you think the Federal Government must intervene to help these people?

Of course there are things they can do, transition programs to help people move to other jobs.

In your opinion, will the approval of NAFTA 2.0 play an important role in the evolution of the economic situation?

It's hard to say that it will have an impact, because there are no big changes. They call it Naphtha 2.0, but in reality it has a small change in the margin. Besides that, it won't happen in the period paralyzed duck [periodo que va desde la eleccin del pasado 6 de noviembre a la entrada del Congreso en enero de 2019], and now Democrats will take the MPR. They will try to go through more changes [al acuerdo comercial], things like environmental protection, not only here, but also in Mexico. They will try to suppress stronger labor laws. If it stays like that, it won't have much impact because it doesn't have many changes, but I doubt very much that it can happen as it is.

What steps can Trump take to avoid or reduce the impact of the recession?

First they have to concentrate on the workers. Workers have very low wage growth. The government has not focused on them or on people with low income. Even if they only focus on fiscal policy, they can make many changes to benefit low-income workers. Extend deductibles, for example. Republicans have talked about increasing tax deductible fees, but we haven't seen them working for it. That's just an example of what they can do.

What amount seems to make sense to you?

$ 10 dollars or more. If you think about matching it with inflation, it will be at that level. They can increase it to $ 15 dollars in 2024 gradually. The problem is that it's very low, and you can't believe that the state will raise it. At present only half of states have minimum wages above the federal level. This is not fair for workers.

You cannot show certain policies of the Trump administration and say "this leads to recession", but many of the things they have done do not help economic growth. Determining the biggest fiscal cuts for companies in 40 years does not help growth.

Do you think that the Trump administration is responsible for the possibility of a recession predicted by some experts?

It's hard to say. There are a lot of tax policies that don't make sense to me, unless you only concentrate on people with higher income. But it is difficult to blame a certain administration. You cannot sign public policy and say "which causes recession", there are many factors that are outside the hands of the administration.

But many of the things they have done do not help economic growth. I mean, putting the biggest tax deduction we've ever seen in 40 years for corporate profits doesn't encourage growth. And that is the only policy this government has done. Public policy to increase labor productivity, increase wages, help consumers, we have not seen all that. Now, if the recession comes, it will be difficult to blame the government, but they help nothing with the public policies that have been promoted in the past half year.

Copyright 2018 La Politica Online SA.
Please do not cut or paste our notes on the web, you have the possibility to distribute them using our tools.