An unexplained surplus of gas flowing into our home galaxy 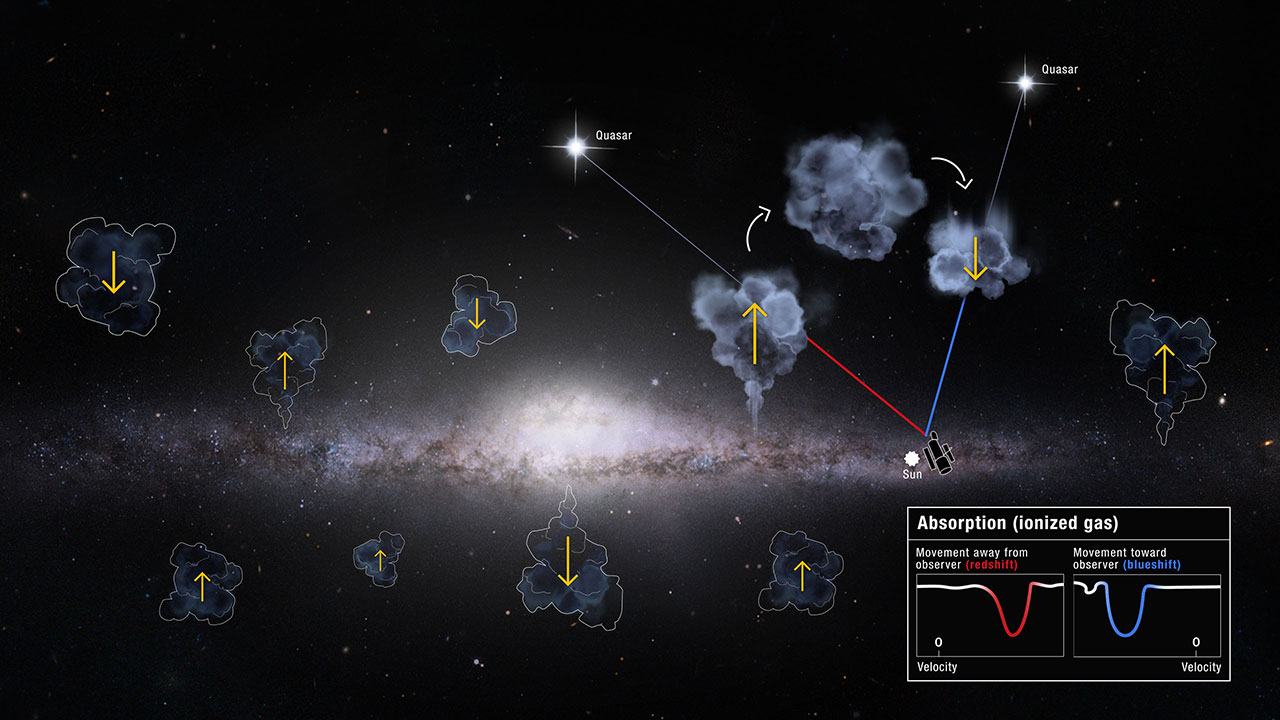 After conducting a galaxy-wide audit of outflowing and inflowing gas, astronomers found that the milky way swallowed a mysterious amount of gas. Based on ten years of data from NASA's Hubble Space Telescope, the study suggests that there is more gas coming in than going out.

Our Milky Way is a frugal galaxy. Supernovas and violent stellar winds blow gas out of the galactic disk, yet that gas falls back onto the universe to form a new generation of stars. In an ambitious effort to lead a full accounting of this recycling process, astronomers were amazed to locate an overflow of incoming gas.

Using its sensitive Cosmic Origins Spectrograph (COS), Hubble is distinguished between outflowing and inflowing clouds. As the gas moves away, it appears red, while the gas falls back toward the Milky Way is bluer.

Astronomer Andrew Fox of the Space Telescope Science Institute, Baltimore, Maryland, said, "We expected to find the Milky Way's books balanced, with an equilibrium of gas inflow and outflow, but ten years of Hubble ultraviolet data has shown there is more coming in than going out."

According to scientists, the incoming gas might be coming from the intergalactic medium. But, Fox suggests that the Milky Way is also raiding the gas 'bank accounts' of its small satellite galaxies, using its considerably greater gravitational pull to siphon away their resources. Additionally, this survey observed only cool gas, and scientists suspect that hotter gas could play a role, too.

Rongmon Bordoloi of North Carolina State University in Raleigh, North Carolina, a co-author on the paper, said, "The original Hubble COS observations were taken to study the universe far beyond our galaxy, but we went back to them and analyzed the Milky Way gas in the foreground. It's a credit to the Hubble archive that we can use the same observations to study both the near and the more distant universe. Hubble's resolution allows us to study local and remote celestial objects simultaneously. "

As the gas clouds present in the galaxy are invisible, the team thus used light from the background quasars to detect these clouds and their motion. Quasars are the cores of active galaxies powered by well-fed black holes. They also shine like brilliant beacons across billions of light-years.

The quasar's light passes through the invisible gas clouds and then reaches to the milky way. The gas in the clouds absorbs specific frequencies of light, leaving telltale fingerprints in the quasar light.

Scientists singled out the fingerprint of silicon and used it to trace the gas around the Milky Way. Outflowing and inflowing gas clouds were distinguished by the Doppler shift of the light passing through them – approaching clouds are bluer, and receding clouds are redder.

Philipp Richter of the University of Potsdam in Germany, another co-author of the study, said, "Studying our own galaxy in detail provides the basis for understanding galaxies across the universe, and we have realized that our galaxy is more complicated than we imagined."

Fox noted, "Future studies will explore the source of the inflowing surplus gas, as well as whether other large galaxies behave similarly. There are now enough COS observations to conduct an audit of the Andromeda galaxy (M31), the closest large galaxy to the Milky Way. "

The study is published in the Astrophysical Journal.