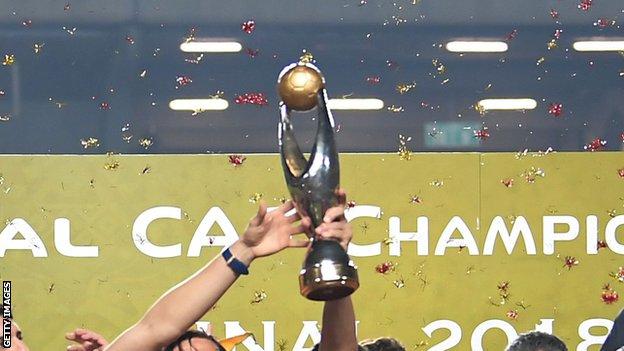 The African Champions League match was abandoned on Friday in Egypt because of crowd problems, in a stadium that is likely to be one of the 2019 African Cup venues.

The Cameroon referee stopped the Group C match between hosts Ismaily and Club Africain Tunisia at the end of time after several spectators threw bottles of water into the field.

There were a number of stops related to the crowd at the Ismailia Stadium before the premature end, with Club Africain leading 2-1.

Egypt was chosen this month to host the replacement Cup after Cameroon was stripped of the right to accept because of poor preparation and security problems.

But Ghazi Ayadi converted two penalties at the end of the first half to change the game for Club Africain, who also lost their first group match.

The second spot kick angers the audience when the referee initially gives a free kick before changing his decision after consulting the assistant.

Supporters of Ismaily became increasingly angry when the second half continued and the assistant referee had to leave his position with five minutes left after the objects were thrown.

With a request that the calm of the staff of the Egyptian club coach be ignored, the referee cancels the match at extra time.

Sid Ali Yahia-Cherif has made the local club superior before the hour.

Egyptian giants Ahly are top of Group D with four points, but could be taken over by Simba SC on Saturday if the Tanzanian team avoids away defeat to AS Vita Club from DR Congo.

Tunis Esperance continued their centenary celebration with a 2-0 win over the visitors FC Platinum Zimbabwe in the African Champions League.

Taha Khenissi scored both goals for title holders to take them to four points from two matches in Group B and leave Platinum with one point.

His first goal came after 24 minutes when he found space to fire home from 10 yards despite being surrounded.

The victory was sealed with the second Tunisian international at 65 minutes.

The Khenissi nodded home from close range after Cameroon midfielder Franck Kom headed the ball over the penalty area.

The match was played at the empty El Menzah Stadium in Tunis after the African Football Confederation sentenced Esperance because of the bad behavior of their fans during last season's tournament.

Esperance has been forced to move the game because of their ongoing reconstruction of Rades Stadium.

Then on Friday, Orlando pirates up to Group B, above Esperance on goal difference, with a 3-0 win Horoya Guinea in South Africa.

Horoya, who was unlucky because he only drew with Esperance last weekend, felt more difficult in South Africa because Zambia player Justin Shonga scored twice in the second half after Thembinkosi Lorch opened the scoring.