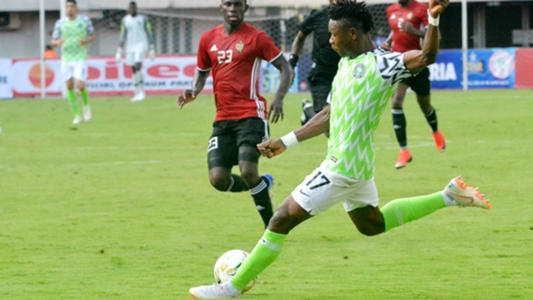 Only Samuel Kalu has not arrived at the Nigeria camp at Asaba with 22 other Super Hawks on the field to begin preparations for Saturday's 2019 African Cup qualifier against South Africa.

The Bordeaux winger is the only one missing as Gernot Rohr's men, including captain Ahmed Musa, goalkeeper Enyimba Theophilus Afelokhai and Alex Iwobi from Arsenal, trained at Stephen Keshi Stadium on Tuesday.

Happens now.
In front of #RSANGA on Saturday
22 players in training at the Stephen Keshi Stadium, Asaba.
Only France is expected by Samuel Kalu.#SoarSuperEagles # Team9jaStrong # AFCON2019Q pic.twitter.com/qvWKBSYSSe

Nigeria, top of Group E with nine points from four matches, came out to avenge their first leg defeat to Stuart Baxter's side, two points behind in second place at the FNB Stadium.

The win for Rohr's team will ensure a return to the Afcon final since 2013, and a remarkable change in the qualifying campaign, which began with a disappointing defeat from home to Bafana Bafana at Uyo last year.